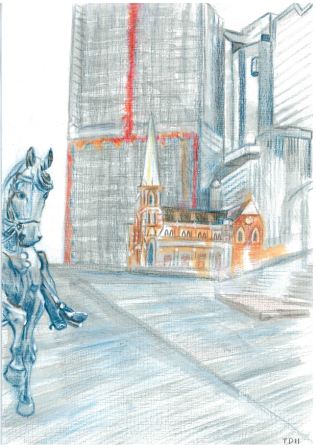 You rushed to get to the Log Out Terminal but it’s clearly too late.

The buildings here have been levelled, flattened to geometric perfection by Metricon’s over-exuberance. Two ridges, like angular shoulders, still stand. A few inactive data nodes are scattered across the square. The landscape still hasn’t settled, as Metricon is shifting and adjusting the ground.

City Hall and the nearby church are the only remnants of 3-Dom. Everywhere else, Metricon has reconfigured and aligned the buildings. You see a large red flash across a high-rise behind the church. Flickering pixels lines peek out through its windows. To the right of City Hall a rectangular building shivers and then regular punched out windows appear, as though Metricon is playing at making grids.

Metricon’s voice roars across the square, “No one needs to leave the Simulation. It’s perfect just as it is! And getting more perfect by the second.” You see high rise buildings pushing into the sky all around you, stabbing the skyline with clean lines.

“This is problematic,” the Guidance Bot says. “The square was your way out. It’s been pre-emptively geometrised. It is unfortunate the two programs couldn’t find balance. Without 3-Dom’s creative spark the Metricon realignment program is just…flattening everything.” It dims a little. “There won’t be anything left of the Simulation if we don’t stop it.”

Your mind is racing. There must be some way to fix this.

A trickle of tiny steel balls rolls past. There aren’t as many as the Emergency Repair System bot sent to Burnett Lane, but maybe it’ll do.

You quickly access the data node near you. It glows feebly, but works.

The balls change direction, flowing up the flat tiles towards you. As the data node lights up you tap the ‘engage’ icon and commit to the request.

The balls begin to vibrate like you remember from the Square Library. The Emergency Repair System rushes directly towards the nearest white pedestal, the one with a horse and rider on it, and blue sparks begin to crackle between the balls and the edges of the white cube.

“I don’t think it’s working.” But as the bot says this you notice it’s becoming transparent. The lines that comprise its body are glowing while the rest is fading. In fact, the whole square is glowing and fading. You’re logging out!

The real world brightens around you. You’re still in King George Square, still flattened and remade by Metricon, but somehow everything is more alive, more colourful. Did your digital adventure affect the real world?

You’ll never know, although you could go back to the Brisbane Square Library and try a different iteration of the Nexus. Maybe next time you’ll leave the Simulation in a more balanced state.