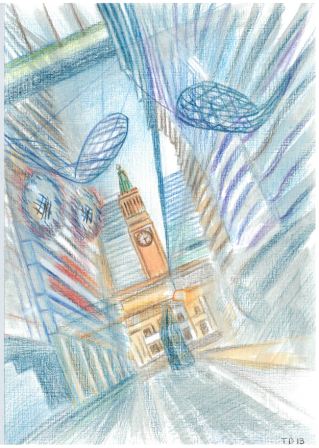 Metricon’s voice thunders from the surrounds. “I’m so glad you came, even though you have that pesky glow bot with you.”

The walls here are rigidly mathematical, beautifully aligned. You miss the curves and stonework of the Treasury Building but the glass and metal certainly has an essence all its own.

The Guidance Bot bumps your shoulder. “You might want to document some of these structures with your DAP. I don’t remember this place looking like this.”

Facing the building, with the street behind you, you can see to your left those telltale lines in the nearest high-rise. Metricon’s face appears in the facade.

As you move towards the giant face the George Street Annex comes into view, opening all the way through the building. City Hall clock tower rises in the distance and Metricon has carved a path directly towards it, through the centre of the building. A curved wooden disk balances in the middle for no obvious reason.

“The city should not be without some of 3-Dom’s beauty,” Metricon explains. “But art is about contrast. These smooth surfaces and lines are a delicate mathematical balance. There is always room for a few colourful buildings, but one must always be considerate of the greater architectural balance.”

Directly above you two disks start to form out of vector points and triangles. You can see right through them but they are solidifying rapidly.

“That’s very nice Metricon!” the Guidance Bot chirps. “But perhaps you should slow down and come back to the Library archives. You know, have another think about…ah…voluntary confinement?”

Towards the far end of the annex the air itself seems to swirl.

“Never mind the air,” Metricon booms. “That’s part of 3-Dom trying to distract me from my work. It is impotent, and I’m almost done. I just need your help to make my buildings permanent and get rid of 3-Dom altogether.”

You look to the Guidance Bot, but it says nothing.

“I need you to come to the GS2 data node on George Street. Follow my voice. You’ll be able to log out of the Simulation when I’m done, don’t worry.”

GS2 Data Node: Trust Metricon and follow it to the GS2 Data Node at 346 George Street and help to finalise its improvement of the Simulation? It promised you’ll be able to log out.

AS Data Node:  Chase down the rest of 3-Dom and try to stop Metricon from eradicating it? You can run through the Annex and take a right at City Hall to the AS Data Note on Adelaide Street (alternatively, head back up George street and turn up Adelaide street in the direction of King George Square).