AS Data Node (Back of City Hall, Adelaide Street) 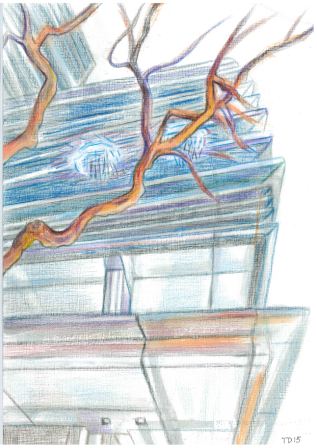 This street looks very different from Metricon’s domain. The part of 3-Dom that you glimpsed in the George Street Annex has been whirling through the street. Across the road brickwork facades and characterful windows gaze out at you. There’s a vibrancy in this place that was lacking in Metricon’s architecture. Each shop shoulders against its neighbour with little concern for harmony, just doing its own thing.

Through the trees on the left you can see some telltale Metricon lines. On your side of Adelaide Street, City Hall looks safe, although the facade looks more like 3-Dom’s handiwork than the flatter tones abutting the Annex.

Metricon’s voice comes from above. It is looking down at you from the vertical gridlines on the corner of the building. “Why didn’t you come to the GS2 node? I had to fend off 3-Dom on my own. I lost three buildings!”

The Guidance Bot responds for you. “The traveller chose to help 3-Dom establish what looks like a more balanced version of the Simulation. Everyone gets a little piece of something this way.”

The bot swirls down next to you and whispers, “Keep it busy while I finish my calculations. With those three buildings offline I should be able to reboot the Simulation. It’s time for Metricon and 3-Dom to go back to ‘voluntary’ confinement.”

“I heard that! I’m right here, you know!” Metricon cries.

The side of City Hall flattens as Metricon tries to push its influence out from the George Street Annex.

Wait, did the bot say it was rebooting the Simulation? What would that do to–?

You never hear ‘one’. You look up but there’s no sign of Metricon, just a fancy corner building with some metal and glass lines. You look across the road. Nothing’s changed, but a certain spark has vanished.

Is this the real world again? Did you get dumped out of the Simulation when it rebooted?

Is there any way to tell?

What if you’re stuck in the Nexus and you never realise?