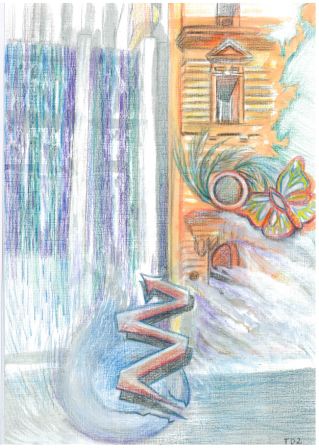 As you arrive you notice more buildings like the Treasury Casino are visible here in Elizabeth Street. You access the data node and 3-Dom’s voice emanates from the pavers under your feet.

“Oh you made it, excellent! I was worried you might try to run after those mindless maintenance balls and activate the Emergency Repair System. I’m the only emergency repair system this city needs.”

A spiral of green pixels washes over the buildings across the road while in the middle of the road a cloud of tiny dots coalesces. It’s the size of your head at first but grows to the size of one of the steamballs back in Reddacliffe place. In one moment it looks like a droplet of water, and in the next it unfolds arms like fern fronds from the top, which then loop back to the bottom to be absorbed.

A second sphere, glowing and blue, appears in the air above your head and starts to pulse.

“Hello!” it chirps. “I am your personalised Brisbane Nexus Simulation Emergency Guidance Bot. I’m afraid there was a slight…uhm…problem reconfiguring the Emergency Repair System and the Metricon program was released from its voluntary archival confinement.”

“Metricon is free?” 3-Dom says, and the green pixels flash over the stark white lines and the black glass across the road.

The bot dips and glows an embarrassed red. “Brisbane apologises for the inconvenience.”

To the right of the white columned building you see sandstone reshaping, pushing out of formerly clean lines. A circle opens up above the door, its edges flickering tiny fronds.

However, in the black and white glass of the neighbouring building thin vertical streaks are painting the wall, like digital rain. This building seems to be resisting 3-Dom’s change.

The lines thicken at the top, and something takes shape in them.”Dominique-3! There is a time and place for your artistry and this is neither. I am reconfiguring the Nexus Simulation to lock you out!”

“I knew this would happen.” 3-Dom sounds petulant. “Metricon is my opposite. It likes things organised and in clean, straight lines. I’m all for that of course, as long as you mix it up a bit. I’ll need to segment into reinforcements. Stand by!”

The fluid ball in the middle of the road begins to change shape more rapidly, until it hardens and cracks open along one edge and three wildly different shapes spill out. One is a rapidly shifting zig-zag, much like a stylised lightning bolt, the second appears to be some kind of spinning cloud, and the last is a glowing neon butterfly easily the size of a small child.

“These are parts of my program.” 3-Dom says. Its voice is more like a chorus now.

“Pleased to meet you!” trills the butterfly.

You’ve never seen a talking digital butterfly before. Even the Guidance Bot is perplexed.

“There’s work for us to do,” the parts of 3-Dom say. “We’ll slip through the cracks and distract Metricon. But we need your help. Together we can make this city beautiful again. Meet us at data node EA on Albert Street and help 3-Dom establish victory!”

The Guidance Bot flashes amber.”No, you and I need to stabilise the Simulation and get you back to the real world. You will need to take the camera attachment of your Digital Assistant Phone and capture images of Metricon and 3-Dom architecture. Upload them to your preferred social media platform with #streetreads14 and then either #metricon or #3dom. Once I get the main guidance program back online we can scan through the photographic data and restore the city to its proper state.

“We need to reconfigure the data node EW near the river to contain Metricon and 3-Dom. They’re too unbalanced. That’s why they were locked up in the Archives in the first place.”

EW Data Node:  Listen to the Nexus Emergency Guidance Bot and attempt to contain Metricon and 3-Dom? Go to the EW Data Node at the end of Elizabeth Street, on the corner opposite the Treasury Casino and mosaic, near the river.

WS Data Node:  Follow the split personalities of 3-Dom to the AL Albert Street data node (151 Albert Street) to help or prevent them from ‘improving’ the Simulation, whatever that might mean.