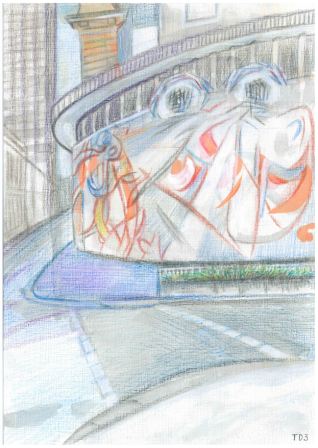 You cast your eye around the Simulation. The wall near you reconfigures into a mosaic as you watch, trying to find its form in Metricon or 3-Dom. You can hear the three parts of 3-Dom howling down Elizabeth Street behind you. What architecture are they squeezing apart? Are the roads turning into parks? You wait for the screeching of tyres and sirens, even explosions, but there’s nothing.

“We’re in the eye of the storm, congratulations,” says the Guidance Bot brightly. “As we transition into our final state you might be able to capture some good simulation artefacts for upload.”

You hear a creaking sound and you realise that the buildings are shifting. Behind the mosaic wall, Metricon is flattening classic architecture. Already the curved walls of the Treasury Building are being transformed to look smoother, more like the walls of the Brisbane Square Library that you can see in the opposite direction.

The bot glows an electric blue. “I have used the data-node you unlocked when you first entered the Simulation. The guidance program is still asking for candy, but I’ve managed to convince it to open up two secure access channels. One is an access path across the digital river. If you take me through it, it should force both Metricon and 3-Dom to merge together. Hopefully that will reboot the guidance program. The Simulation will be a neat mix of 3-Dom and Metricon, but there will be a little more 3-Dom. Brisbane won’t be the same.”

You look across Victoria Bridge which glows briefly as the access channel is opened by the bot.

“Alternatively we could continue past the Mosaic to William St. I can reconfigure the Mosaic to merge Metricon and 3-Dom as we pass through it. If we do that, when the two programs are combined I think it will contain slightly more of Metricon than 3-Dom. Just follow William Street until you reach the WS data node.”

WS Data Node:  Head down the William Street access channel to find the WS data node? This will harmonise both programs but leave Metricon slightly dominant. The data node is the first one on the right side of the street as you head away from the Brisbane Square Library.

SL Data Node:  Walk across the Victoria Bridge access channel, and turn right at the park across the river? You have to take the right-hand side of the bridge or you will be trapped in the Simulation. Once you cross, turn right and keep walking towards the State Library until you see a giant black statue next to the SL data node. This will harmonise both programs but leave 3-Dom slightly dominant.