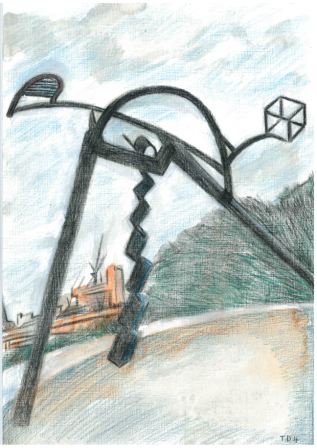 When you arrive at the sculpture you marvel at how ordered the landscape you’ve passed was, while still feeling natural and distinct.

With each step across the bridge you saw the cityscape reconfiguring, the buildings becoming lower and darker. Even the plants seemed to be structured to a plan.

Here, you can see back across the glittering digital river and watch the high-rises and classical buildings pressed together in the distance. There’s no movement anymore, the battle seems won.

The Guidance Bot leads you to the foot of the strangely organic and geometrical black figure that towers above you. It animates, moving ponderously to face you. Little metal sparks spring out at random before dissolving back inside. Its head is a giant Necker cube. Its randomness reminds you of 3-Dom’s flowing and shifting bubble that you saw at the EG data node.

“You can call us Metridom. Or 3Con,” the figure says. “I am the amalgamated Brisbane Nexus Guidance program. Look at the beauty you’ve created. Ordered lines abound. Nature is pressed into service but it is still free, like the molecules inside a water drop, roiling beneath the meniscus.”

“Someone’s a little full of themselves,” the bot mutters. It glows a peaceful blue, though, despite its complaints.

“It is very peaceful here,” replies the New Guidance program. “You have done well and deserve our thanks.”

The bot spins giddily. “Yes! Our thanks! Unfortunately, we’re no longer able to provide you with Nexus-branded hyper-colour shirts, as hyper-colour is considered a little too edgy for this particular iteration of the Nexus.”

You raise an eyebrow at that, but who knows: maybe there are other versions of this program where the battle between Metricon and 3-Dom didn’t work out so peacefully.

“Thank you again,” the shape says in its strange voice. “Please Log Out at your leisure.”

Maybe you’ve had enough of the excitement and you press ‘Log Out’ in relief, feeling the digital world fade away around you as you reappear in the real Brisbane City.

But maybe, just maybe, you want to hang around a little longer. Maybe this new, more harmonious Simulation deserves a little bit of exploration, now that the quarrelling is in the past.

After all, in the end, you’re the one who decides.