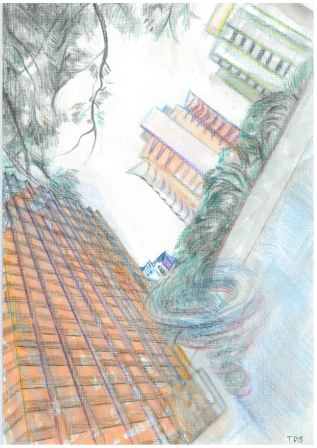 As you walked here you saw the subtle shifts in the surrounding buildings. White stone and glass and steel shifted to a darker brown, much like the sandstone of the Treasury building. The distant skyline which had been overpowered by Metricon’s structures, have darkened and became less stark.

“These surroundings integrate well with my programmed mathematical structure,” the Guidance Bot says as you arrive at the data node. “I could get used to this.”

Across the road foliage spills over the concrete walls and a tiny whirlwind appears over the edge of the building. You recognise it as part of 3-Dom’s multiple personality.

“You are trying to subvert 3-Dom and Metricon programming at the same time. This is unacceptable. We cannot coexist!”

The Guidance Bot flies across the road to challenge the whirlwind. “Metricon and 3-Dom are already merging. I am rebooting the guidance program so both will be locked down and integrated into the system. I like this iteration. It stays!”

The whirlwind swirls growing in size and swoops towards you.

“Traveller!” the bot yells, buffeted by the winds. “Integrate it into the Simulation using the building behind you. Metricon is strong there; it’s all patterns and straight lines.”

How do you even begin to do that? You wonder, pull apart a building?

The bot’s voice is weakening. “Traveller! It is important that you observe all the changes around you. The Simulation buildings are generated by the Nexus computers every time a visitor from Realspace observes them. By examining the architecture you are forcing the Simulation to draw itself according to our new design. You have to keep looking around and documenting it until the guidance program reboots and the patterns are locked in.”

“No!” The whirlwind darkens the sky, but the bot was right: as you stare intently at the mathematical patterns behind you, the walls harden and settle into their geometrical shapes. But these shapes are very different from the steel, glass and stone you saw on Elizabeth Street. There are aspects of both programs here.

When you turn back to the street that part of 3-Dom has disappeared, absorbed into the stonework.

“Well done, traveller.” The bot slowly returns to your side. “This merging of the programs has made Brisbane a more comforting place. At least for a humble Guidance Bot like myself.”

You’re not sure if the same goes for you. Nonetheless, the Simulation now has a certain consistency that it lacked before.

“I’ve initiated a slow Log Out procedure for you. You should start noticing the real world intruding in a few minutes, an hour tops. Maybe two. Wander around for a while, check out the sights. It’ll be fine, I’m sure.”

You’ve managed to stabilise the Simulation, but you still don’t have your hyper-colour shirt, and you certainly didn’t see fireworks, although 3-Dom’s butterfly was pretty sparkly.

Nothing seems to be changing. When is the Log Out supposed to start, and would you even notice? The Guidance Bot has gone. Are you already back in Realspace? What did 3-Dom say again, back when you first met?

Visitors might get trapped in the Simulation if you muck around with it too much. ‘Realspace overflow’ and other technical gibberish like that.

Are you out? Are you ever going to get out?