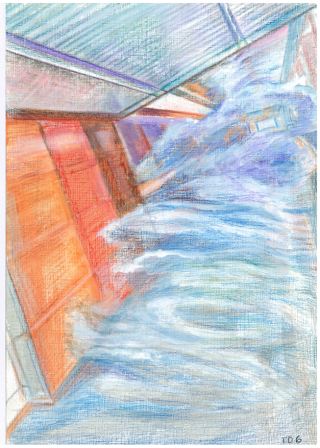 All around you the buildings shift as Metricon and parts of 3-Dom struggle for dominance. Mathematical grids and art-deco styling fight for architectural control. You look straight up and see Metricon high-rises stretching towards the sky.

Across the road a building is all black stone and glass, but its side is shifting into rendered brick.

The spinning cloud and frantic lightning of 3-Dom bounce from building to building. Glowing neon butterfly wings distract you.

“I told you it was Metricon,” cracks the lightning, then dives out of sight.

The other two dance through the air, alighting on brickwork and shop fronts. A trail of colour is left wherever they pass.

The Guidance Bot sits above your shoulder. “I’m a little concerned Metricon is trying to trick us. There’s no direct conversion of Metricon buildings but there is a tunnel nearby.”

You take a few steps down Albert St, away from the Queen Street mall, until you can see straight in the tunnel. Sheets of geometric colour decorate the wall on the left, and neat panels, unlike anything 3-Dom could construct, line the walls on the right.

“We could sneak through here to get away.”

Before you have a chance to ask the bot what it means there is a sudden cry from the black building.”Metricon is attacking from both directions! It has converted the wall of the Hilton Hotel on Elizabeth Street into a smooth shell!”

3-Dom’s cloud rolls out of the tunnel. “The paths under the street are converted too!”

The butterfly flaps into view. “If you two attack Metricon now, I will have time to send my butterflies to take back Elizabeth Street. Divide Metricon’s attention and we should be able to shut it down.”

A thundering voice booms from the sky. It’s Metricon. You can almost see a face in the reflection of the high-rises glass, but you’re not sure. “Traveller! I have no quarrel with you. Leave these parts of the 3-Dom program to me. Your Guidance Bot should be able to log you out of the Simulation in no time.”

The bot bumps your head. “It’s right. There’s a Log Out Terminal set up further towards the Queen Street Mall. I’ll be able to access an emergency override program to help you escape if you can get to it.”

“No!” growls the lightning bolt. “You’re staying here and helping us! I won’t let you leave!” It leaps off the black building, sprouting spirals and stars, and streams towards the Mall and your best hope of escape.

QA Data Node: Try to beat the lightning bolt to the Log Out Terminal that Metricon is opening for you at the QA Data Node? Go to the node near Albert Lane.

EH Data Node  Leave the bolt and cloud to distract Metricon while you chase after the butterfly down Elizabeth Street to the EH Data Node outside the Embassy Hotel. Helping 3-Dom win this battle is more important.