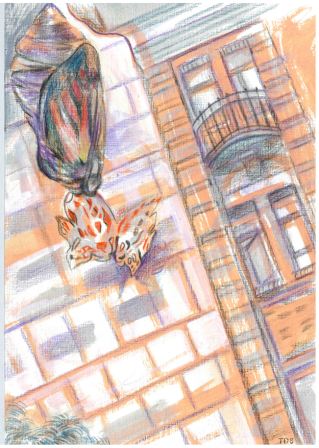 You saw the wall covered with 3-Dom’s cocoon as you approached this data node. All of the buildings adjacent to the Hilton Hotel have been converted.

3-Dom’s butterflies have covered much of the wall, and it’s clear that Metricon is still distracted by the other parts of 3-Dom, as you’d hoped. The cocoon is pulsing, extending tendrils across the modern walls like a creeping vine.

A butterfly lands on the wall near the edge and fidgets with the surface.

“Friend of Dominique-3!” The butterfly dips its head and licks the Hilton Hotel wall. “Behold, the beautiful artistry of the Embassy Hotel. 3-Dom shapes its bones and remakes the hard squares of Metricon. This Hilton Hotel will fall to the conversion and be reborn! ”

A butterfly lands on the wall above you.

“Traveller! It is important you observe the changes,” it says. “The Simulation buildings are generated by the Nexus computers every time a visitor from Realspace observes them. By examining the architecture you are reinforcing 3-Dom’s new design. You have to document our new designs if you hope to force Metricon completely out of the system.”

As you watch, the walls start to settle into their new, fanciful shapes. The Embassy Hotel across the road is beautiful 3-Dom brickwork, and it’s clear that the butterflies are ascendant here. The conversion is happening slowly and Metricon is trapped. The Simulation is bending towards art, but will it bend too far?

“This is all very exciting,” says the bot. “But I need the Traveller to get out of the Simulation so we can reboot the system. No one will come if there’s a chance they’re going to be absorbed into a wall or something. Hahaha. Not…ah…not as if that would ever happen.”

You don’t want to be trapped in here for any longer than you need to. The bot bumps you towards the data node that you accessed when you arrived.

“I’ve managed to map a log off path. Just cross to the other side of the road, where the Embassy Hotel is. Crossing should phase you out of the Simulation and back into Realspace. Trust me.”

The plan seems unusual but who knows how long it will take for 3-Dom to ‘fix’ the Simulation.

But if you leave, will you ever be able to log back in at the Brisbane Square Library? You hope so. Maybe next time the Nexus won’t be so dangerous.