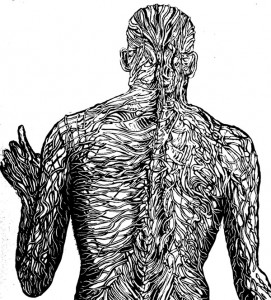 There’s a cold wind blowing across the concrete landscape of King George Square. You feel nervous, but Lissa is projecting calm. You don’t know whether to feel patronized or relieved by this. She obviously knows you’re still embarrassed by what happened at the crossroads.

You walk by the Citycycle bikes to the benches near Speakers Corner, to get a good view of the Square. Lissa pats one of the bikes as you go past. “My Mentor, Mr D, he loves bikes.”

Mr D. He was Australia’s Regional Manager a few years back, then Lissa’s old boyfriend, Steve, replaced him. Steve didn’t last long, though he did save the world. Some people aren’t suited for the job, you guess. Lissa looks perfect for it.

“He’s fine. Quite dead of course, but he likes it that way, he has a rather nice place in the Underworld, plenty of books, and a good bike for getting about in. I’m sure you’ll meet him one day. He does like to come to the occasional Christmas party.”

City Hall is across the way, to your left pressed between the Groove Train cafe and the retaining wall, is a cataract of ferns, and palms, fronds blowing in the wind. Brisbane can be such a windy city.

A man chucks his rubbish in the bin, and gives you two a wide berth. His eyes are huge as he regards Lissa. You wonder what he sees. People sit in the sun, chatting or curling their hands around cups of coffee.

You feel like you could do with a coffee yourself. No time for that, though.

“Look,” Lissa says, and then she shakes her head. “You shouldn’t need to look. You should feel it, close your eyes.”

You close your eyes, and, for a moment, you feel nothing, and then you do. There is a foulness in the air, a kind of psychic discomfort. And it’s to your left, across the expanse of the square, towards Ann St.

You open your eyes, and look straight into Lissa’s, you almost jump out of your skin. Death is studying your face, but she is smiling.

A Stirrer. It’s standing about a hundred metres away, near the Town Hall. One of the ancient undead that steal the bodies of the deceased and walk around in them like evil tourists. Stirrers live in a city in the Underworld. They used to dwell in this world, before life, before they lost this living universe. And they still resent us for what they lost.

Wherever they go, they suck up life like human-shaped black holes, killing by their presence. They’re the source of Vampire myths, of zombies, of most things that go bump in the night.

“We need to send this one back,” Lissa says.

The Stirrer hasn’t noticed you yet, but it will, and the body it’s inhabited is big. This could get nasty. It’s walking out of the square towards Ann St, away from a line of brace symbols (about two dozen of the bisected triangles) which you can now see glowing all along the Adelaide St edge of the Square.

“They tend to go that way, we have fewer brace symbols, along those roads, drives them towards the river makes them easier to find.” Lissa looks at you, she seems to have second thoughts. “This will be dangerous. I’d understand if you’d prefer to go to MacArthur Chambers and the dead soul I can sense there, it needs tending to as much as this.”

MacArthur Chambers: Really ready to deal with the undead if one little soul was able to launch you across the mall? You think not, and you go to the footpath before the MacArthur Chambers Blast doors on the corner of Edward and Queen near the wave-shaped bench. You take the easiest route heading back to Queen St Mall, and turn right, crossing at Edward St.

Ann Street Statues: Brave enough to follow the Stirrer to Ann St, and the bottom of the stairs leading up to the statues of the drovers near George St? You’ll need to dash across the Square, crossing at Ann st and turning right. You’ll come to the drovers soon enough on your right.