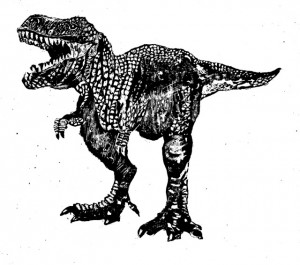 You swear the T-Rex winks at you. You turn to Wal, and he shrugs.

“These damn thinnings Lissa says.”Any thinner and half of hell is going to come rushing through”

There’s a dim roar that grows in intensity. The T-Rex’s head turns, towards you and it looks hungry, starving in fact. It bounds towards you, head low and its great skull strikes the glass. The thick plates crack, but hold. It shakes its head, confused and then grunts. The triceratops has smashed its way into its belly. They’re a tangle of reptilian rage.

T-Rex and Triceratops, biting and snarling. They’re much faster than you expected. The earth shudders with their combat.

T-Rex gets in a good bit around the neck, but old Triceratops shakes it off and goes for a goring.

“This isn’t the Underworld. You don’t belong here,” she says. “Go!”

Instead they charge at the glass, and it begins to break. Another blow and it will shatter completely.

“Give me some blood,” Wal says.

You look at him.

“I need blood. Your blood. It should be powerful enough, even if this is your first day. You do have your knife don’t you?”

You nod. Run the knife along your hand, and bleed again.

Wal grabs your hand, covering his own with blood.  “Yes, there’s power there all right. Thank you,” he says. “Shame our time together was so brief.”

Then he flies up, and over the glass and straight at the T-Rex. There’s a burst of light, a roaring of energies, and then Wal and the dinosaurs are gone.

Lissa walks up to the glass, peers through. “Wal appears to have stopped the thinning here. Nice to see he could be so useful.” She doesn’t look happy.

“That was very brave of him,” you say, blood’s dripping down your fingertips, but you don’t want to make a fuss.

Lissa’s lips thin. “It was. So much like his master in that way. And nearly as annoying. Steven was…” her voice trails off.

You know things didn’t end well, you don’t push it.

Lissa looks back at the glass, and the crack that veins it, and shakes her head. “Not our problem,” she mumbles to herself. “Can only do so much.” And then she seems to notice you for the first time. She grabs your hand “Look, you’re bleeding. I can do something about that. Don’t move.”

Her hand is icy. But, as she touches you, you feel the flesh heal. The pain in your hand fades.

“Well on the way, to Cicatrix City,” she says. “And the day’s not done, people never stop dying,” she says, “I think a visit to South Bank is in order, there’s at least one soul there. We can go via the river, or head straight to the ABC Building.”

Footpath River: Go to the River to near the base of Victoria Bridge, just at the start of the Promenade? Just walk to the edge of the museum building, take the overpass at the Cultural Centre Bus stop, then walk to the river and head towards the promenade almost beneath the bridge.  Surely there’s nothing but a lovely view there.

ABC Building QPAC: Head to the ABC Building and the footpath of Russell Street near the QPAC building? The Fastest way is along Grey Street, following it about a block and a half, and then turning down Russell St, walking until you are directly across from the ABC building and café, almost at the end of the ring road on the QPAC side.