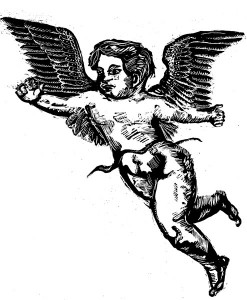 You stop at the crossroads halfway down the Mall. To your left is a street sign, blue. The soul is almost the same colour, more vibrant, less muted. It darts to the left, and you lose it among the crowd. Where is it? Where is it? You don’t have time for this!

You flick a glance above you, and the roof is all steep angles supported by steel legs that look a little like those of some sort of Martian War Machine: as though the whole structure might just march away.

Hungry Jacks is busy as usual, a woman is buying a Go card at the newsagency. It could be any other day, and you realize that this is true, and that it will be true for you as long as you are Pomp. From now on, the dead will be a day-to-day occurrence.

There. You can see him, it’s like a rock jutting out of a river, it leaves a wake. People veer to the left and the right of the soul.

“Notice,” Lissa says. “How the living avoid the dead. Usually they’ll do anything to avoid them. The dead and the living don’t mix. That’s why our job is so important. The longer a soul stays here, the more dangerous it can become.”

“Just how dangerous?” you ask.

“You’ll know when it touches you. Souls possess an energy, and when it isn’t released, it can become a storm. Imagine a storm of death.”

You look at the blue soul, is it crackling? Is it about to pop?

And that’s true. You’ve had the training.

You take a few hesitant steps towards the soul.

The dead man frowns. “You can see me?”

“Of course I can,” you say, there is a flash of light beside you, you swear you see a tiny cherub shoot up into the air. You watch its flight a moment. Then it’s gone. But you’ve been distracted. Stick to the job at hand, literally.

You reach out to touch the glowing blue soul, and it growls at you.

“NO!” it says, and you are thrown backwards by the force of that cry. You scramble to your feet. It feels like your nose is broken.

The dead move fast, faster than you expected. A jerky sort of pace as though they are running on a slightly different speed. One moment he’s beside you the next he’s past you.

But Lissa is ready.

She reaches out and touches him. The man stops, looks at her once, his jaw works as though he is chewing on some new truth, and he smiles a moment and is gone in a burst of ruddy light.

She reaches to touch you, and you wave her away. You’re embarrassed by how slow you were. You touch your nose. No it doesn’t seem to be broken.

Lissa smiles at you, and her eyes are bright, at least she doesn’t seem insulted. “See, not so bad, you just need to be quicker on your feet. The first one is never easy. But there’s always more to practice on,” she says. “One thing you learn almost at once is that people never stop dying.”

You don’t know if that’s reassuring or not.

“Now,” Death says, and you never should forget that this lady in black with her Mickey Mouse brooches, is Death, “We are at a crossroads, and it isn’t for me to ignore the symbolism. Here things are thinnest. “

You want to mention the cherub, but you’re still not sure if you actually saw it, and your ears are ringing.

“You’ve two choices. Down Queen St Mall to the Blast Doors out the front of MacArthur Chambers, I can feel another soul there. One that we must see to, and soon. It’s been left too long.” A bird lands on her shoulder. A crow, it seems to whisper in her ear. And she nods her head.

“Or, my Avian has just informed me that there is a darkness lurking in King George Square. It is contained for now, but I would like to see you deal with it.”

MacArthur Chambers: Do you really want to face another dead soul so soon after the first almost gave you a flat face? If you decide to redeem your botched attempt to help a soul, continue along Queen St Mall, with Albert St at your back, and cross Edward St to MacArthur Chamber’s impressive blast doors, and stand near the wave-shaped bench.

Speaker’s Corner: Or does this lurking darkness ring alarm bells? Then King George Square awaits, head to the benches in Speaker’s Corner above the carpark. Just walk down Albert towards Adelaide St, cross with the lights, and onto the Square turn right past the café, and head towards the statues of speakers in that corner.