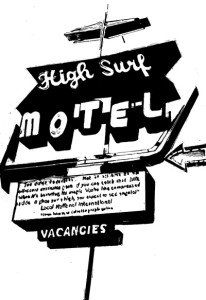 The High Hotel sign glows a kind of blood-smudge-sunset-brown. There’s a soul standing there, looking forlorn.

“I wanted a little more,” he says.

He looks around ninety. A spry sort of ninety, there’s a twinkle in his eye.

“Just think about what’s on the other side,” you say.

“Do you know?” He asks. And then, there is a flash before you, a cherub, it has to be a cherub, darts past.  “Sorry,” he yells, as he nearly takes you out. There’s far too much cherub buttock flying past.

You and the old soul look at each other, and both of you laugh. The dead aren’t all bad!

“Things are already getting more interesting,” the soul says.

You smile. “That’s not the half of it. But it’s awesome.”

He flashes you a grin. You touch his arm, and his soul passes through you. It hurts a just a little, more an ache than anything else, but you guess it should. There’s a deep sense of calm that flows through you. You can feel his soul, entering the Underworld. He seems happy, it seems right.

The cherub flutters before you. It’s the weirdest looking cherub you have ever seen, there’s a smirk to it that is most uncherubic. Its eyes are shaped like almonds, and it’s smiling. You just wish it was wearing pants.

“You again,” it says, and you remember where you saw it last. Those eyes staring at you from the hole in the sphere.

“This is an inkling,” Lissa says.

“Not, just an Inkling, surely.”

Inklings are tattoos come to life. You’ve heard of Wal. You know who this is.

“It was my partner’s inkling,” Lissa says, as if there was any doubt. “Steve’s inkling.”

The one you’re not supposed to talk about!

“Oh,” Wal says. “I shouldn’t be here.” He hangs his head mournfully.

You want to give him a reassuring pat, on the back, but, all of a sudden you can feel a disturbance somewhere. And it feels big.

There’s a distant roaring coming from Grey Street. A sound out of time.

Lissa frowns. “There is a thinness here, the underworld is close. And … damn it! We need to get to the Dinosaurs on Grey St.”

“There’s a source of thinness in Grey Street. And all of a sudden it’s ripped bigger. This is going to be dangerous. But if we do it right we might just halt something worse from happening.”

“We call them regional apocalypses. We have to run!”

No time to think! You dash after Wal and Death onto Grey St and Dinosaurs. Hopefully they’re not hungry. You pelt down the path to the rear of the gallery, skid right, then left when you get on Grey St. The dinosaurs of Energex’s Playasaurus Place are about halfway along the block to your left. And they are NOT where they should be…