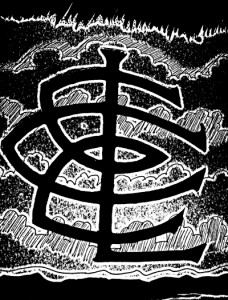 Best to go where the shoppers are, how much trouble can that get you into?

“Most of us grow up in the job you know,” Lissa says. “I did, my parents were Pomps, and their parents, too. That’s why I like training the newbies, I get to see it all through their eyes.”

Lissa leans on the Green Traffic Signal box, and smiles, a distant sort of smile.

“This place brings back memories,” she says. “Not the best sort of memories, I must say. I wasn’t Death back then.” Her face darkens. You know who was, Steven, her partner. Some people say it was his fault the troubles happened in the first place. “We fought a war here and won, sort of. But it wasn’t without consequence. Reality’s shifted… you’ll see. Hell’s been leaking into our world a little more than it used to. It’s making its presence felt. You’re job’s not just to send the dead to the underworld, but to patch up the cracks.”

Death certainly has presence, and an effect on the environment, even if no one seems to notice. The lamp to your right alternates blazing and dark. The Mouth of the Mall is to your left, drawing you into a world of shopping not exactly congruent with death. The clock on the awning above the St George bank is set to midnight, the temperature zero. The traffic lights change, pedestrians cross the road, a child, nearby, complains about something. The nearby Milano restaurant smells delicious, pizza, steaks, risottos, bacon. Death standing next to you seems to heighten everything, even your hunger. Your stomach rumbles, embarrassed, you try and pretend it’s not you.

Someone coughs nearby, a smoker; Lissa tilts her head towards the sound as though taking a reading. “Not long,” she says, “but not today. Now, death is a kingdom of memories, of reflections, of hauntings. You work with us, and that is what you’ll walk through. Ghosts are real, and it’s your job to deal with them. Our job. We’re in the business of Death, but not killing. We’re not part of dying, but what comes after. We’re the story that happens once the book is closed.” Lissa laughs. “You have such an open face. I need to be careful, I think I could tell you too much.”

People say this to you all the time. You’re not sure if you really want to be Death’s confidante though.

She points to the symbol on the green box, it seems to burn through you, all at once you feel less scatty, more focused, perhaps more focused than you have been in days. “Symbols are important to us. You know the brace symbol, the one that repels the living dead?”

And you do. It’s a triangle, point facing down, split through the middle with a slash of a line.

She taps the box, and the symbol there. “This is an even older symbol, though it has no real power, it can strike you like a punch. It symbolizes memory. It reminds us that bad things happened here, and that we shouldn’t forget them.”

You know what she is talking about. The war with an Old God, a plate heaped with tragedies, a whole bunch of DO NOT GO THERE! Conversations to have with the one most personally involved. So you try and look grim, and knowing (but not too knowing) and nod. It works. Or seems to.

“But, today, let me promise you. Nothing bad is going to happen. Well, nothing too bad.”

You shudder. Just what is Death’s definition of bad?

“Oh and there’s that job with the Accounting firm, if this doesn’t work out,” she says.

You try and hide your surprise. But Lissa sees through it.

“Don’t worry, I’m only teasing. Now, there are two jobs near at hand, one starts on Victoria Bridge. I can sense something that way, a deeper thinning, maybe we should…” She shakes her head. “No, you need to choose. I can also feel  something down by the floating feather in the Mall. A soul, I think. The more dead you encounter the more you will understand.”

Victoria Bridge, CBD Side: Go to the edge of Victoria Bridge, (and the start of a different and possibly more dangerous sort of trouble) just across from the lights and closest to the Casino, East side of the River Facing QPAC?

Queen Street Mall – Myer Feather: Or head into the mall to the Feather suspended in the air, on the right side of the mall, outside the Myer Centre? 91 Queen St Mall.