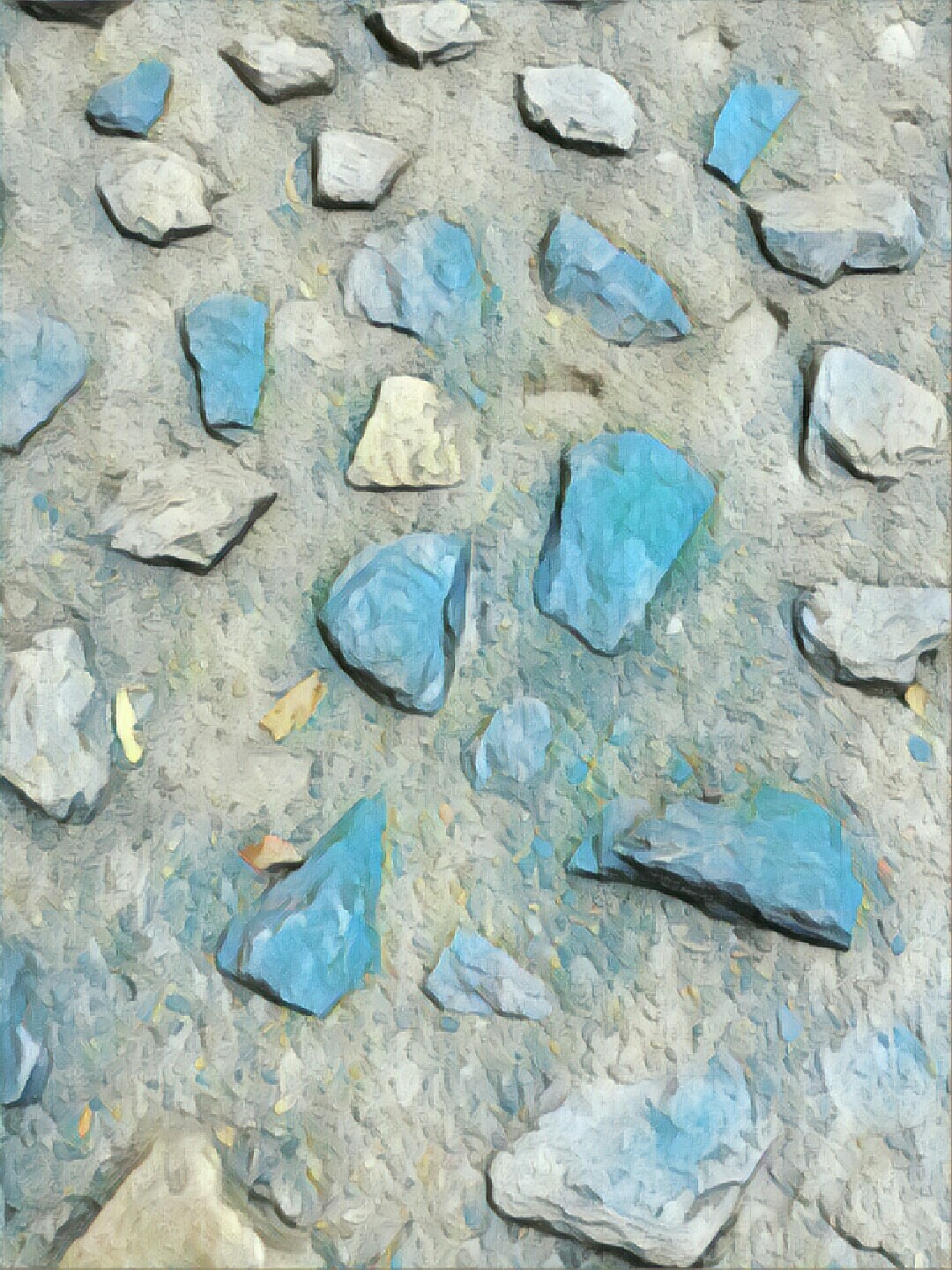 From its edge, the causeway looks safe, but there are a lot of lighter coloured stones. Mul says, “Remember, use your stick and stay on the dark ones.”

Gum strides onto the nearest dusty black stone, hops to his left to the next, takes two steps and jumps to the large charcoal grey. His heel clips the beige rock immediately behind it and the rock falls into the darkness beneath. He turns and shouts, “It’s okay. I’m fine.”

“Hah,” Gum shouts holding up his stick. “Forgot about that!”

“Gum,” Midge shouts. He’s holding the bark. “What about the board?”

“Shhhh!” Mul sounds like air escaping from a truck tyre. With her finger to her lips she hisses, “Gum. Stay. Very. Still.” The breeze in the trees dies. A branch snaps. Dry leaves crunch on the forest floor.

Mul points at Midge and silently mouths the word, “Go.” He bounces onto the first stone, and throws the bark to the second. It skids across the surface and stops on the rock lip. At the third stone he wants to throw it, but Gum waves him not to. He demonstrates pushing it to form a bridge between the two. Midge simply walks across and the two stand the bark on its edge.

Mul runs, leaf held above her head. It fills with wind and bends like a wing.  Mul leaps. The leaf parachute carries her to the charcoal stone Gum and Midge are on. As soon as she lands, she urges Gum to press ahead. Diligently using his stick, he returns every couple of stones to help Midge with the board. Mul waves at you to come.

You back up a few steps, grip your Brush box wing, run and leap. Floating across the stones is quite a feeling. You can’t stop the WHOOP. Mul grits her teeth as she helps you land. She slaps her hand over your smile as another crack echoes in the brush. Hearing it, Gum and Midge start working faster.

A bubbling gobble rings out as the turkey, with it’s bright red neck and contrasting yellow sag of skin, emerges onto the track. The Brush Turkey looks and pecks at the dirt where you’ve been standing. “Run!” Mul shouts. “Jump!”

Gum and Midge, well past the half way mark, are building speed. They’ve knocked a few holes in the causeway. You can see four between you. The turkey walks onto the causeway. It tilts as it upsets a faded yellow stone, and flaps cagily.

You run hard, pumping your legs. From the edge of the stone, you jump. The leaf carries you as far as a midnight blue stone surrounded by holes mid-causeway. Two more launches like that should get you to safety.

Gum and Midge have made it all the way.

In mid-air, Mul shouts, “Hurry Up!” She lands on the stone beside you, which wobbles badly. Not stopping she takes two strides and throws herself into the air just before it disappears.

Gum, Midge and now Mul are deliberately hitting light coloured stones with sticks to make it harder for the turkey to get all the way across. There isn’t enough of a run up for you. You hop two stones sideways. The turkey’s claws scratch the rock surface behind, it’s almost on you. Whatever you do, don’t look back. I said, DON’T look back.

Sprinting as fast as you can, you leap higher and further than you ever have, only to realise the last row is a stone too far. You’re not going to make it. Lifting your legs, you close your eyes and wait

You feel bark under your feet and open your eyes.

Midge and Gum are grinning from one end of Midge’s surfboard, your landing strip. The turkey skids to a stop, contemplates the distance and eyes you all, before returning to the far bank.

A Green Frog tucked into the Sedge on the side of the track, blinks and says slowly, “That was close.”

“So much for treading gently!” Midge says.

“Never mind that,” Midge points up the hill. “The Weir’s just up there. Time for those waves!” You follow the Viros up the track onto the grass flat, and cross it to the pond on the left hand side.

1-2 minutes walk along the footpath approx. 150m toward open grassy area adjacent to the weir.