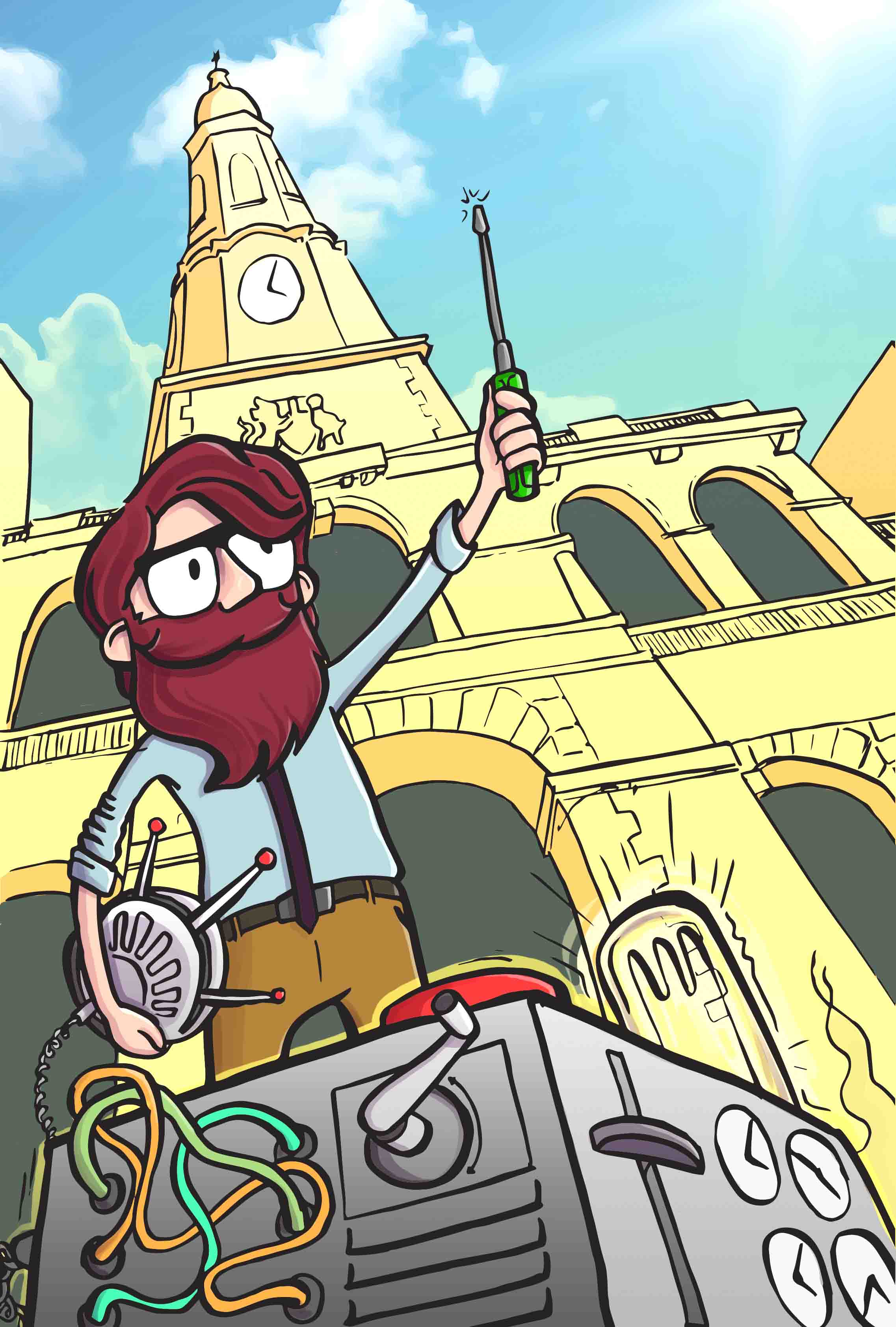 “Pass me the screwdriver,” says Professor Bragg. You don’t even see the screwdriver. You yawn, and look up at the clock on the tower of the Town Hall. It looks like it’s frozen. You’ve only been here a few minutes, but it feels like hours.

“Nearly done,” says the Professor. He punches a few buttons on a machine: about the size of a shoe-box, covered with toggles, dials, lights, gears and switches. The Professor called it a ‘trans-temporal-something-or-other’, whatever that means. Something to do with weather, maybe? The Professor pulls out a pair of ugly helmets with antennae bulging from them. He pulls one on, and plonks the other on your head.

He sets the machine on the ground and pushes a button. Nothing happens. Well, that’s normal for the Professor’s inventions. You look around. Life still seems to be normal on King William Street. You yawn and look up at the clock again. Something’s different. The hands are moving: backwards.

You feel giddy, like you’re on a train that took off too quickly. Then…

You look around again. It’s still King William Street, but not the one you know. You dart out of the way as a horse and cart rattles past you. The people inside it stare at you like you’re an alien.

The Professor grabs you by the shoulders. “Look!”

He points to the Town Hall, which now looks brighter, newer, just as the doors burst open and a crowd of people emerge. The men are all dressed in top-hats and tailcoats, the women in silk dresses.

You stare at the Professor’s machine, sitting in the dirt where the footpath had been just moments before. A time machine. He built a time machine.

A policeman in a flat cap and a coat with silver buttons marches towards you, swinging his truncheon. You turn around. “Um, Professor…”

Another horse and carriage is rattling towards you. Towards the machine.

“Look out!” you shout. But it’s too late; the carriage wheels crash into the machine, and it bounces along the street, gears turning, lights flickering.

As the Professor scoops up the contraption, you see his face starting to blur. He looks at you in panic.

The crowd from the Town Hall has started to move up the street, and the policeman is almost upon you! You grab hold of the Professor’s arm.
Do you:

Beehive Corner (1866-1901): Run for it. Take the clearest path, head west along Franklin Street to Darling House, dragging the Professor behind you.

Darling House (1866-1901): Decide that blending with the locals is the answer. Drag the Professor north to Beehive Corner.