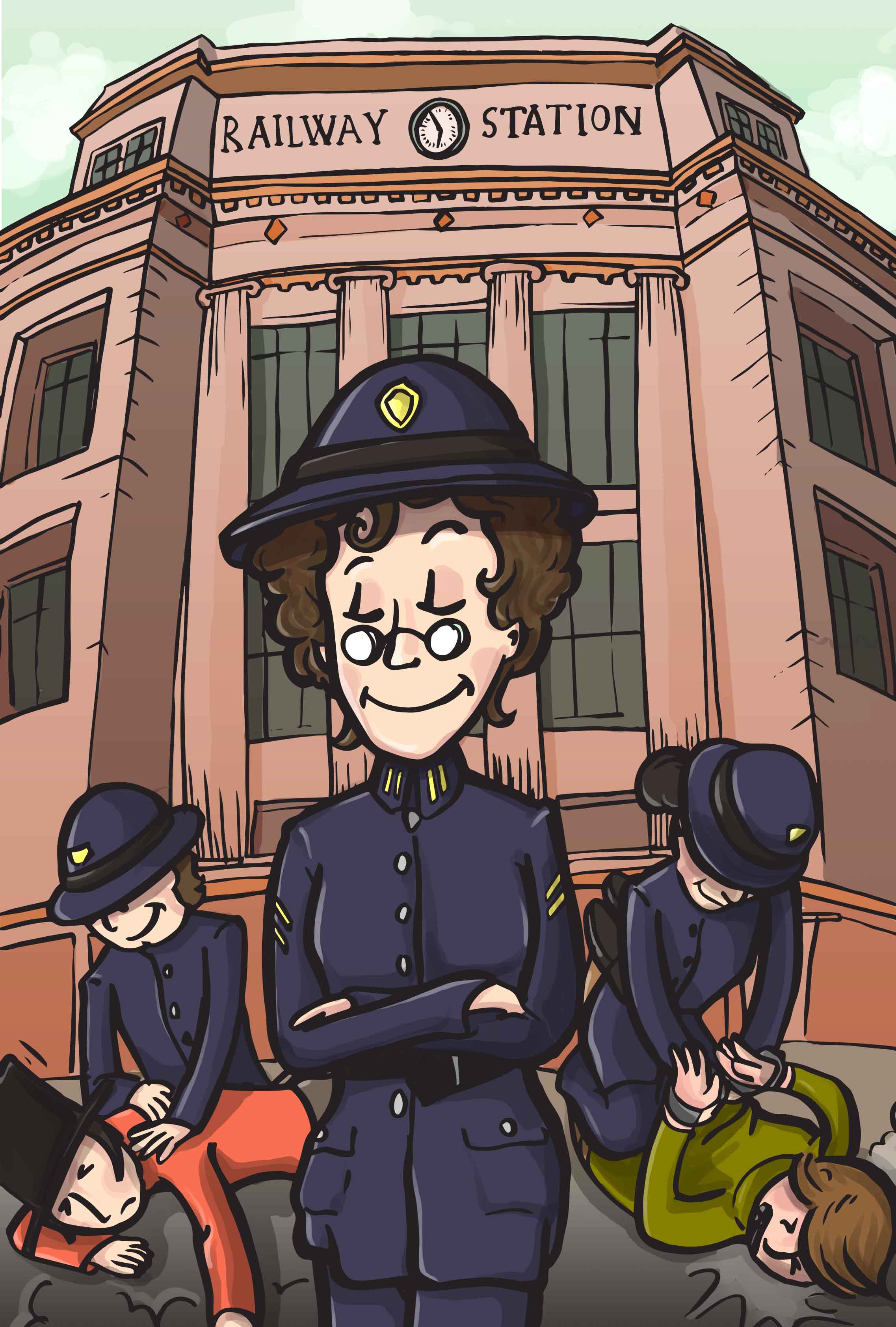 The newly recruited policemen who are chasing you stop suddenly, staring open-mouthed up at the four columns towering proudly above the front awning, the clock face separating the words ‘RAILWAY’ and ‘STATION’.

“Where did that come from?” they say, pointing.

The Professor looks down at the time machine.

“It’s brought us all forward again! The new station wasn’t built until 1926…”

The policemen shake their heads as though clearing some internal doubt, and grab you by the arms. One of them yanks the time machine out of the Professor’s hands, and holds him too.

“Right, well, wherever we are, you’re under arrest,” says one of them.

“Excuse me?” says a polite voice.

A woman with short, curly hair and a pair of round glasses approaches you.

“Why are you harassing these people?” she asks the policemen.

“Um, because, they look suspicious,” says one them, pointing at your clothes. “And they’re up to no good—they made this railway station appear out of nowhere!”

The young woman looks at them, sternly. “I’d advise you to let them go.”

“A police woman? There’s no such thing,” they say.

Several more women approach from each side of the station entrance, forming ranks behind Constable Cocks.

The men release your arms and approach them.

“Seems like you need to learn a lesson about telling lies, little ladies,” says one, and they lunge at the women.

Within seconds, the men are writhing in pain on the ground, pinned down by a policewomen each. Constable Cocks sees your expression of amazement.

“I insist all my lady constables be trained in jiu-jitsu,” she says matter-of-factly.

She looks down at the moaning men, and adds, “Oh, and first aid.”

For the first time on your adventure, you realise no one is chasing you. The Professor takes the opportunity, at last, to pick up the time machine, and adjusts the appropriate settings. He takes a deep breath.

A loud steam train whistle blows, and when you turn around the street is full of cars.

You notice two police officers, a man and a woman, walking up North Terrace.

“I wonder what other firsts this city might be proud of in the future?” asks the Professor. “There’s no better time than now to find out: we’re back!”