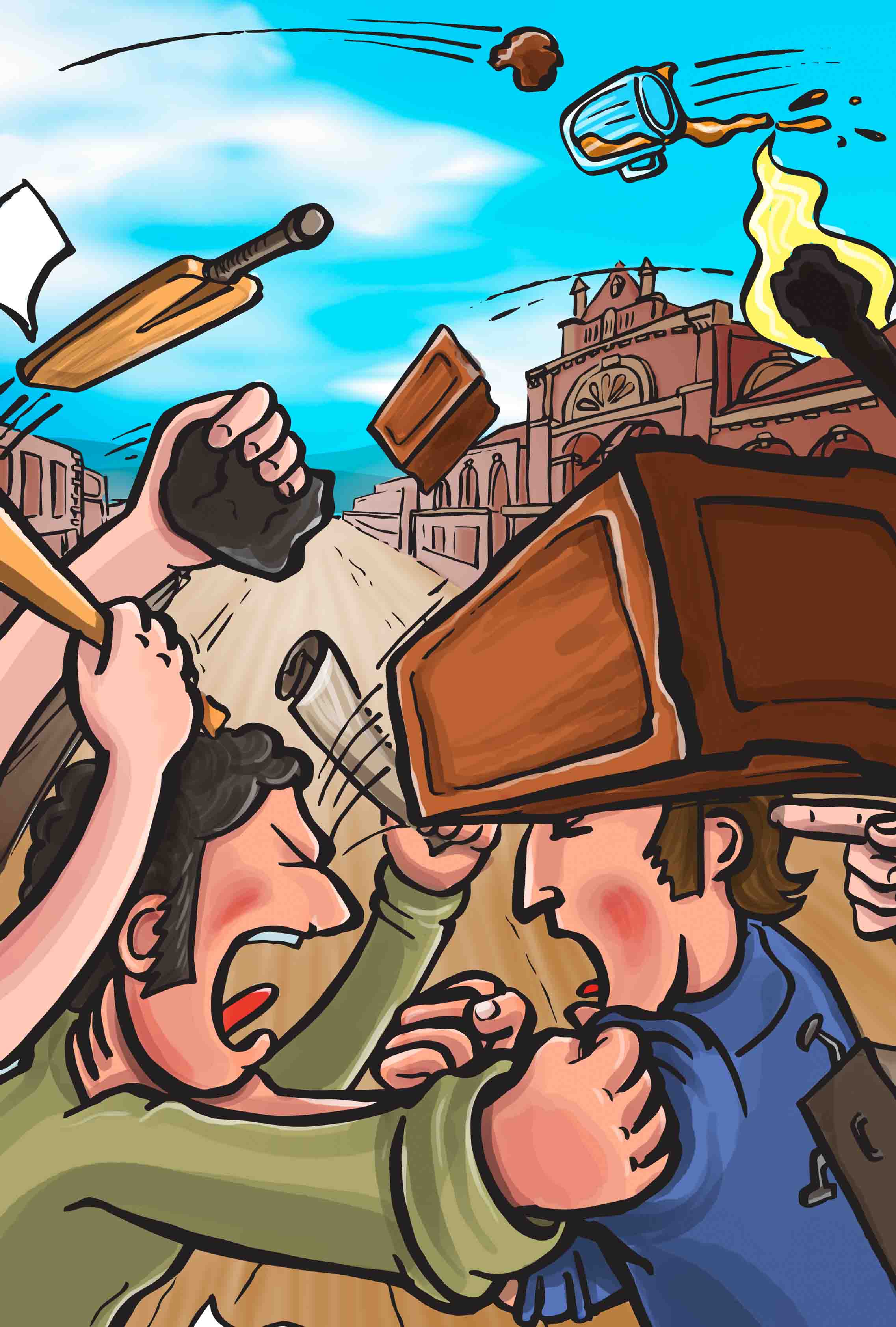 “Look out!” shouts the Professor, and the air fills with the roar of an angry crowd. You duck as a brick sails through the air towards you, straight over your head, and… THWACK! Hits a man square between the eyes.

You watch him sway for a moment, then he drops backwards like a falling tree.

“It’s the 1855 Hindley Street Riot!” shouts the Professor, as you hurry up the street, away from the huge crowd of angry men who are roaring and brandishing bricks. The Austral Stores has not been built yet, instead there is just a row of shack-like shops.

You barely get three steps before you are stopped in your tracks by another angry mob, even louder than the first, coming towards you from the other direction.

A man in the first crowd shouts to be heard over the din, pointing a finger accusingly at the other crowd. “We saw you in the pub, we know your lot voted for Forster!”

You duck as the crowd roars angrily and a hail of bricks and rocks is exchanged. Then a man from the second crowd calls out, shaking his fist at the first mob. “Well we saw you in the pub, we know your lot voted for Fisher!”

Another barrage of debris, and angry shouts. Then a man staggers from the first crowd towards you, pointing a finger in your face. You wince as the alcohol on his breath stings your eyes.

“You,” he says, suspiciously. “Who are you going to vote for, Fisher or Forster?”

“Um,” you say, looking back and forth at the two crowds. “Maybe it’s better if nobody knows who I vote for?”

The crowd falls silent for a moment. Somewhere up the street, there is the tinkle of broken glass falling out of a smashed window.

“Um, yeah? I mean, it might stop this kind of thing happening?”

A few heads begin to nod.

“And maybe it’d be better not to vote in the pub?” you suggest.

You duck as a brick sails past your head, and both crowds start to roar again, even louder than before.

The Professor grabs your arm.

“I think we’d better get out of here!”

He fires up the machine, as a hail of stones is launched at you. You clench your eyes shut…

…but nothing hits you.

You open your eyes. The Austral stores, Byzantine and carnivalesque with their arches and turrets, stand calmly over the street—a monument to the calmer times when coffee palaces took over from the taverns. A modern car drones by. “Are we back?” you ask.

The Professor scans the street. “Well, nobody’s trying to arrest or kill us, so I think so. It’s funny what you said to the rioters back there—you know, the secret ballot was adopted in Australia just after that riot! You don’t think… maybe…?”