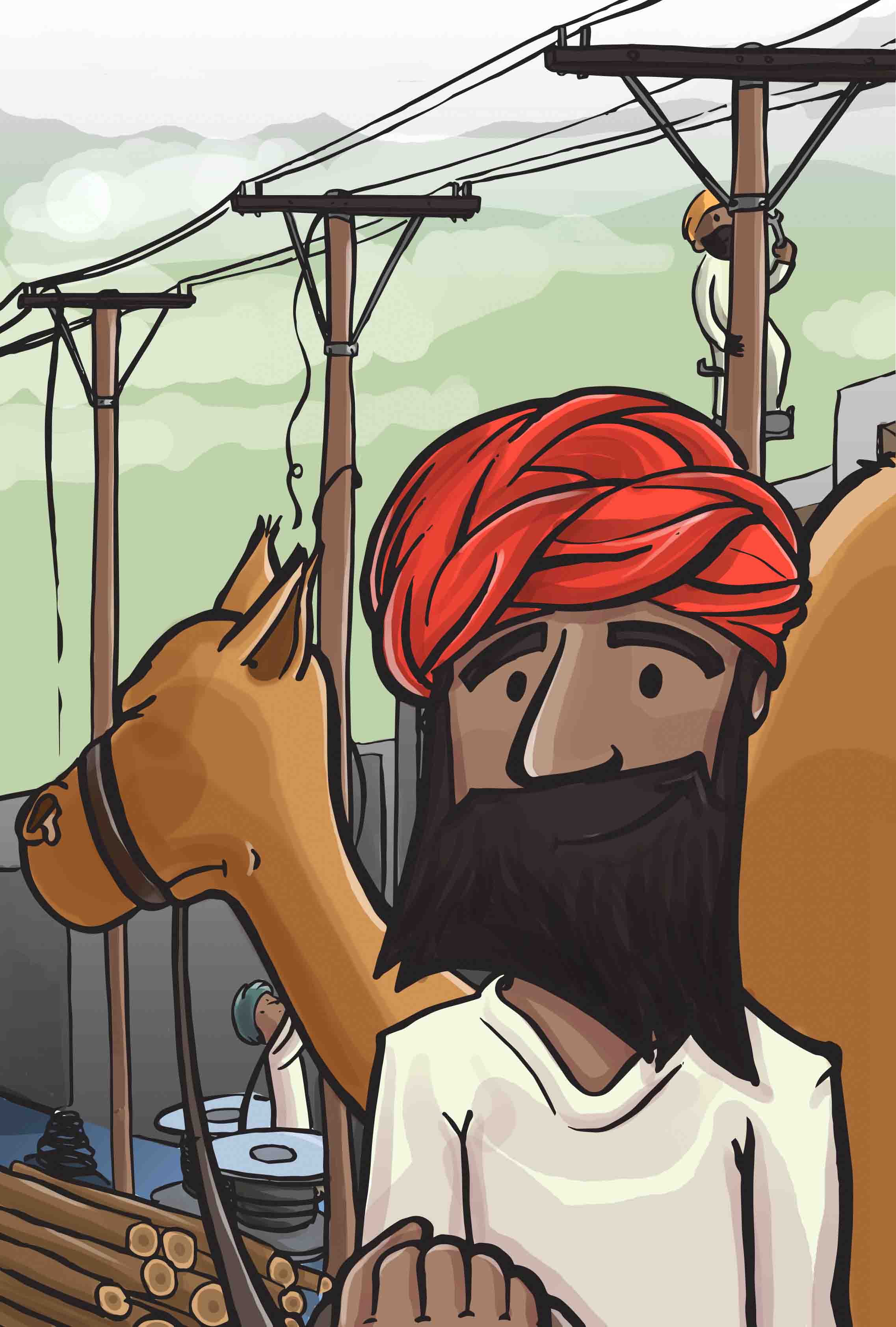 The machine sparks and whines as you reach the square, and then… SPLAT! Something wet and sticky hits you on the back of the neck.

You turn to see a giant glassy eye staring at you: it belongs to a camel. It snorts, blinking its long lashes, and pokes its tongue out.

“Salam!” says a voice from behind the camel.

A bearded man in a neatly folded red turban beams at you as he approaches, and takes the camel by its reins.

“I see you have met my friend! My name is Merban, of Tarin, but where might you be from in such… unusual clothes? Are you lost?”

“Sort of,” you say, looking at the battered time machine in the Professor’s arms.

“Ah!” says Merban, following your gaze. “You are engineers? I know something of this!”

“What kind of engineer needs a camel?” asks the Professor.

Merban laughs. “One who needs to build telegraph lines through the desert! I led a whole team of camelmen to build the Overland Telegraph Line—a wire that stretches two thousand miles, all the way from Adelaide to Darwin, and beyond, beneath the sea, to Indonesia! We came from all around: Afghanistan, Baluchistan, India… and we brought our camels with us! Much better than horses for the deserts of this land.”

Suddenly, you have an idea.

“Hey, if you know about telegraph lines, do you think you could help us make an antenna for our machine?”

Merban smiles. “Of course! Why, even now I am overseeing construction of the first Mosque in Adelaide, with minarets that will reach to the sky! It’s just around the corner, on Little Gilbert Street.”

He puts two fingers in his mouth and whistles, loudly.

Within moments, the square is filled with camels and men in turbans, hoisting poles and pulling cables. The Professor twists a cable into the machine, and turns the dials.

Merban waves as the machine starts to whir.

A gust of wind blows around the square, so strong you have to close your eyes.

When you open them, Merban is gone, and so are the camels. The drone of car engines rumble, and you find yourself staring at the sweeping curve of the Voyagers sculpture. It’s like a dune of sand, frozen in the middle of the city.

For a moment it makes you think about your own voyage, and the people you’ve met along the way. Who knew it took so many different groups of people to make a city? And how many more stories are buried in the past, waiting to be discovered? Or the future, for that matter?

You turn to see the Professor tinkering with the machine, and you realise: only time will tell!