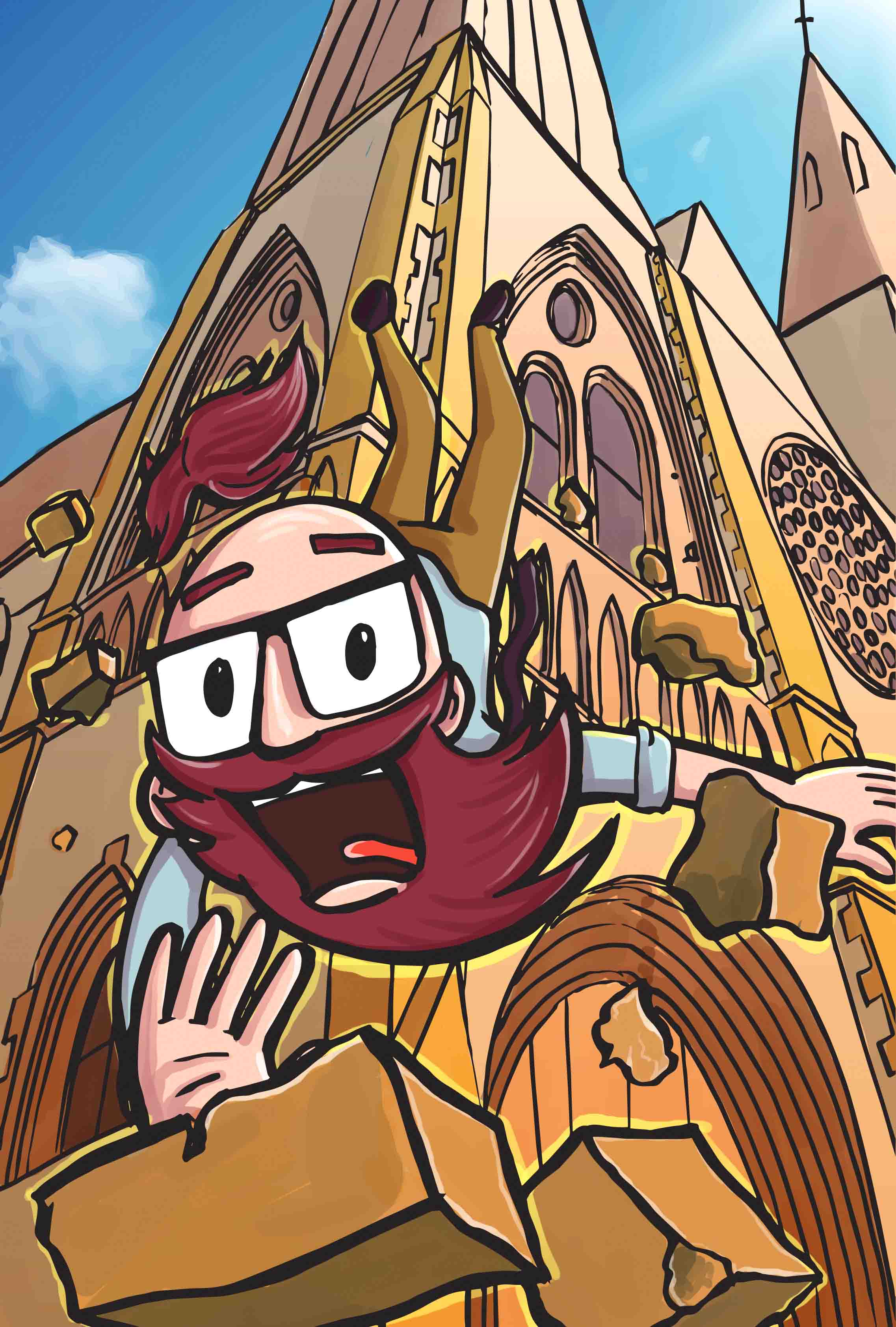 A haze of fog blurs the majestic sight of the giant stained-glass circular window at the front of the cathedral, and you feel the giddy feeling in your stomach of time travel once again. The bells of a tram clang in your ears. The Professor points at a lamp post.

“Electric lights, electric trams, and look at the cars,” he says as one chugs by, tooting its horn. “It’s the fifties, I’d bet.”

He uncoils the copper wire from the market and wastes no time climbing the side of the bell-tower, which looks shorter than you remember, only about the same height of the nave. As he climbs, a priest in a white robe emerges from the entrance and looks up.

“Ah, you must be the surveyors for the extension to the bell-tower,” he says.

You decide not to worry him, and nod.

“I do hope your friend is careful on that stonework, only this is the oldest cathedral in Adelaide, you understand.”

“Really?” you say. You smile, trying to make a joke. “Oh well, it is the City of Churches, I’m sure you’ve got spares!”

He doesn’t get it. “Well, yes, but each one is different, and important! You see, South Australia was founded as a free state, where settlers were free to bring their beliefs with them from wherever they came from. Religious groups of any denomination were allowed a parcel of land, so most of them used it to build their churches. Now there are churches from every era in our history, and from many different religions, countries and creeds. It just shows what this city stands for: freedom and diversity.”

“Ready?” shouts the Professor. “Turn it on!”

You turn a dial on the machine, and a low rumbling fills the air. The priest frowns.

The ground begins to shake, and you notice cracks beginning to form in the gothic brickwork.

The Professor, clinging to the side of the cathedral spire, hugs the stones nervously.

“It’s an earthquake!” he says, as chips of stone crack loose and drop to the ground.

The priest ducks and darts aside as they fall. From all around the city, loud cracks like fireworks are echoing as buildings rupture and split.

“Maybe someone up there is angry,” says the priest, pointing at the sky.

The Professor shakes his head, and points downward. “No, it’s more likely to coming from down there! The city’s built on two fault lines, two sides squeezing together, pushing the ground up: that’s why the Adelaide Hills are there!”

He ducks as a brick sails past his head, and explodes on the ground by your feet.

“Um, maybe we save the lesson until after we’re home!” you shout. “This feels like a big one!”

The Professor nods, enthusiastically. “Oh yes, five-point-five on the Richter scale, at least!”

You plug the antenna into the time machine, and hit the buttons at random.

Just then, there is a loud CRACK and the stones that the Professor is holding break loose.

“AAAAAGGHHHH!!!” he shouts as he falls…

…and the Professor is frozen, surrounded by stones, all hovering a few foot above the ground. You look around: cars, traffic lights, someone talking on a mobile phone.

“Oh good!” says the Professor, and falls flat on his face. “Ow.”