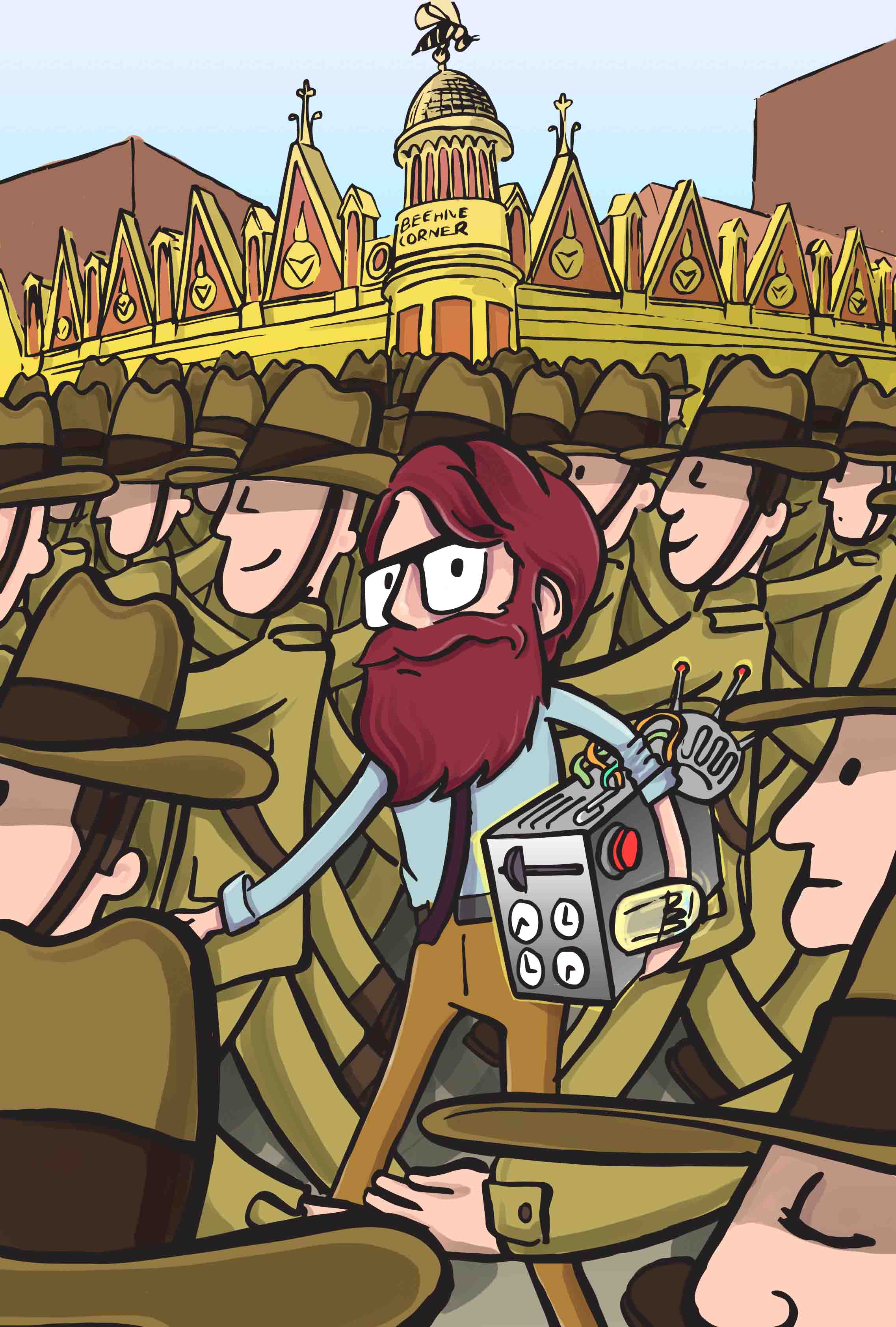 You slip through the crowd as the air crackles around you.

“What in the world?” says the Professor. You follow his gaze, looking up at the curiously turreted building on the corner. Then you notice the giant bee, perched on the dome. “That wasn’t there in 1866! We’ve travelled forward, at least thirty-five years! But that means the machine must be broken, it’s activating without my control! Uh oh!”

The crowd around you cheers, and a marching band crashes its way up King William Street, followed by rows upon rows of men in dark brown jackets and hats.

“Excuse me,” says a man angrily, waving you aside.

He is cranking a handle attached to a wooden box, standing on a wooden tripod.

“What are you doing?”

“It’s the latest thing! A cinematograph, a moving picture camera, and now you’re going to be in the shot!”

He stares at you. “Parade? Why, it’s our brave troops, off to fight the war in Africa!”

What war in Africa?

“Of course, the Boer war,” shouts the Professor over the din. “Every state in Australia sent troops to help the British in South Africa.”

“Why do they look so happy?”

“They don’t know what they’re getting into. This is the first war any South Australian has ever fought in. Come on, we’d better move before…”

A hand clamps down on your shoulder, hard.

You turn to face the biggest and woolliest moustache you’ve ever seen. It belongs to a red-faced Sergeant-Major, and it waggles underneath his wobbling helmet as he barks at you.

“WHAT ARE YOU DOING OUT OF LINE?”

He looks you up and down.

“AND WHAT ARE YOU WEARING? SOME KIND OF NEW UNIFORM IS IT? IT’S HORRIBLE. AND SO IS THAT HAIRCUT!”

You try to explain, but the Professor has already jumped to join the troops, glancing back at you with a worried look.

The Sergeant-Major shoves you into the end of a row of privates, his moustache twitching so violently it looks like it’s about to fly off his face.

“YOU DON’T WANT TO FIND OUT WHAT WE DO WITH DESERTERS!”

You find yourself marching in step with the soldiers alongside you. This isn’t good. You glance over at the Professor, and at the machine in his hands. It’s starting to spark again. You’ll need to make a run for it, but which way?

Regent Arcade (1901->1925): Bowl over the Sergeant-Major, grab the Professor and run east up Rundle Mall, towards Regent Arcade.

Buffalo’s Head (1925->1838): Sneak away from the Sergeant-Major, out the other side of the parade, catching the Professor’s eye as you sidle past. Cross the street to the west, head up Hindley Street, and stop at the Berkeley Hotel/Black Bull Pub.