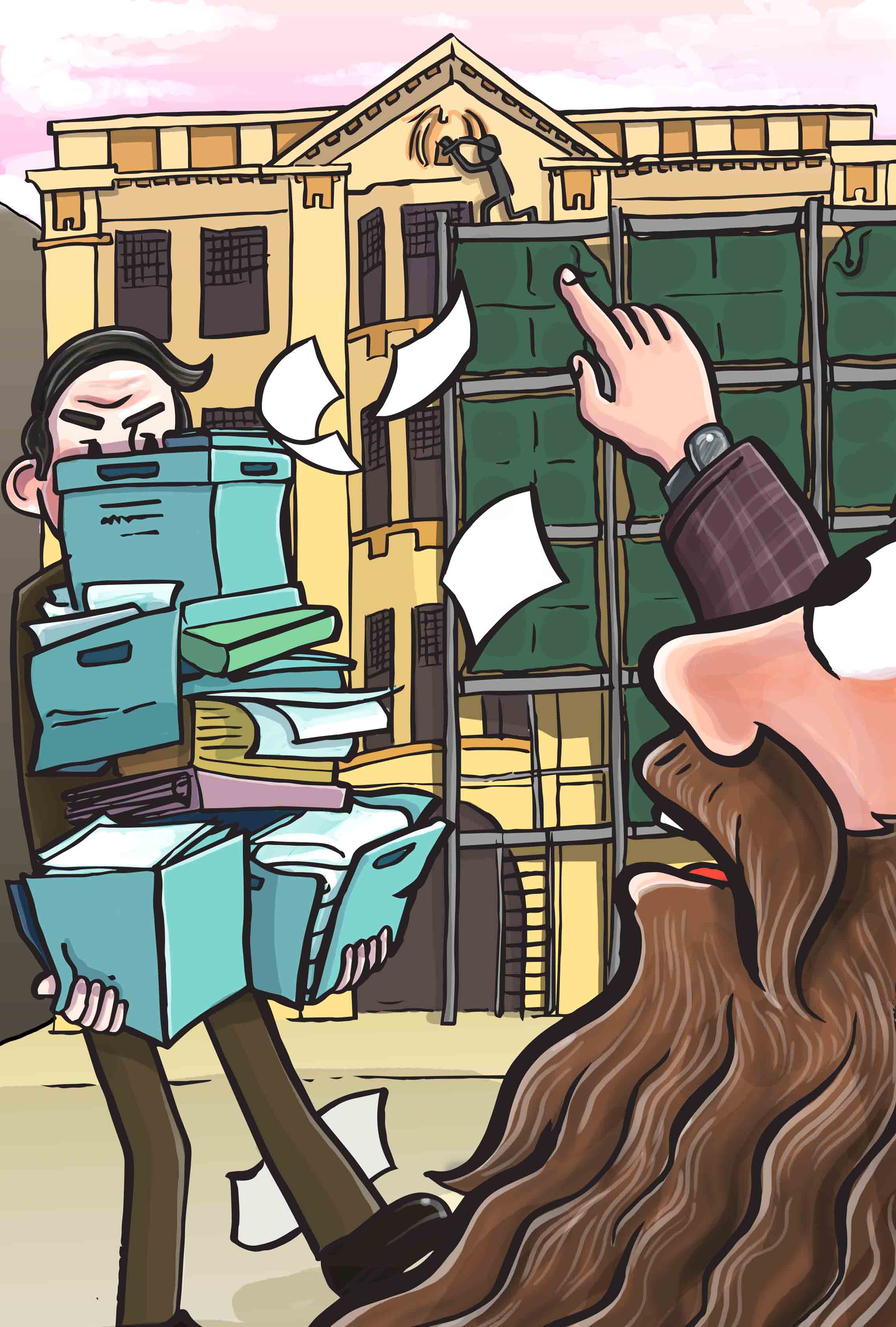 The footsteps of the policeman fade behind you as the air crackles and sparks around your ears.

You’ve barely caught your breath when you find yourself skidding out of the way of a tram… but a tram with no wires. It’s being pulled by a horse!

“Watch where you’re walking!” snaps a voice behind you.

A small man in thick spectacles, probably a clerk, glares at you over the huge pile of ledgers and boxes in his arms. He jerks his head backward, to a tall, important-looking gentleman in a suit and hat behind you.

“You nearly ran into Mr Darling!”

The tall gentleman with a big bushy beard—Mr Darling—slaps the clerk on the back, nearly sending him flying.

“John Darling Jnr,” whispers the Professor, inspecting the machine. “But that means it’s 1901, the machine’s transporting us without even me activating it! Bother!”

Mr Darling puts an arm around your shoulder and points up at the building. Scaffolding surrounds the top, and a man hangs from a sling, chipping away at the plasterwork with a hammer and chisel. You can just make out what looks like a bushel of wheat.

“Aha! And this must be the new wheat threshing machine, is it?” he says, and snatches the time machine from the Professor. As the Professor gropes to take it back, Darling turns and weighs it in his hands. He plonks it into a box on top of another box in the clerk’s overloaded ledgers, making the poor man stagger precariously.

“No!” you say, reaching out for it, but Darling has his arm around your shoulder again, and is dragging you up the street as a pair of horse-and-carriages clatters to a stop beside you, one fancy, the other plain.

“Oh, some new mining gadget from BHP is it? You’d think they’d tell the chairman these things…”

You struggle to wriggle free, as the clerk stumbles back and forth, evading the Professor’s arms with each awkward step.

“Well, whatever it is,” says Darling, grabbing a box from the clerk as he waddles past and loads it into the more ornate of the two carriages, “I didn’t become the Wheat King of Australia without being at the cutting edge of technology. Here, a hundred pounds for it, that’s more than fair.” He slaps a crisp Union Bank note into your chest.

In a reflex you grab it.

The clerk clambers into the back of the dowdier of the two carriages, and the Professor stops, looking back and forth between them.

“Jenkins,” says Darling as he climbs into the fancy carriage. “Go see to our business at the markets, I’m late for the theatre!”

The horses whinny and before you can stop them, they take off at top speed, Darling’s carriage to the north, the clerk’s to the south.

“Wait a minute!” says the Professor, “who had the time machine?”

How could you let this happen? You blame the time machine helmet on your head for making your all muddle-headed.

Queens Theatre (1901->1841): Think that Mr Darling has decided to take the machine to the theatre to show off to the other businessmen. Head north up Bentham St through Topham Mall to Currie St, then west to Gilles Arcade and the Old Queen’s Theatre.