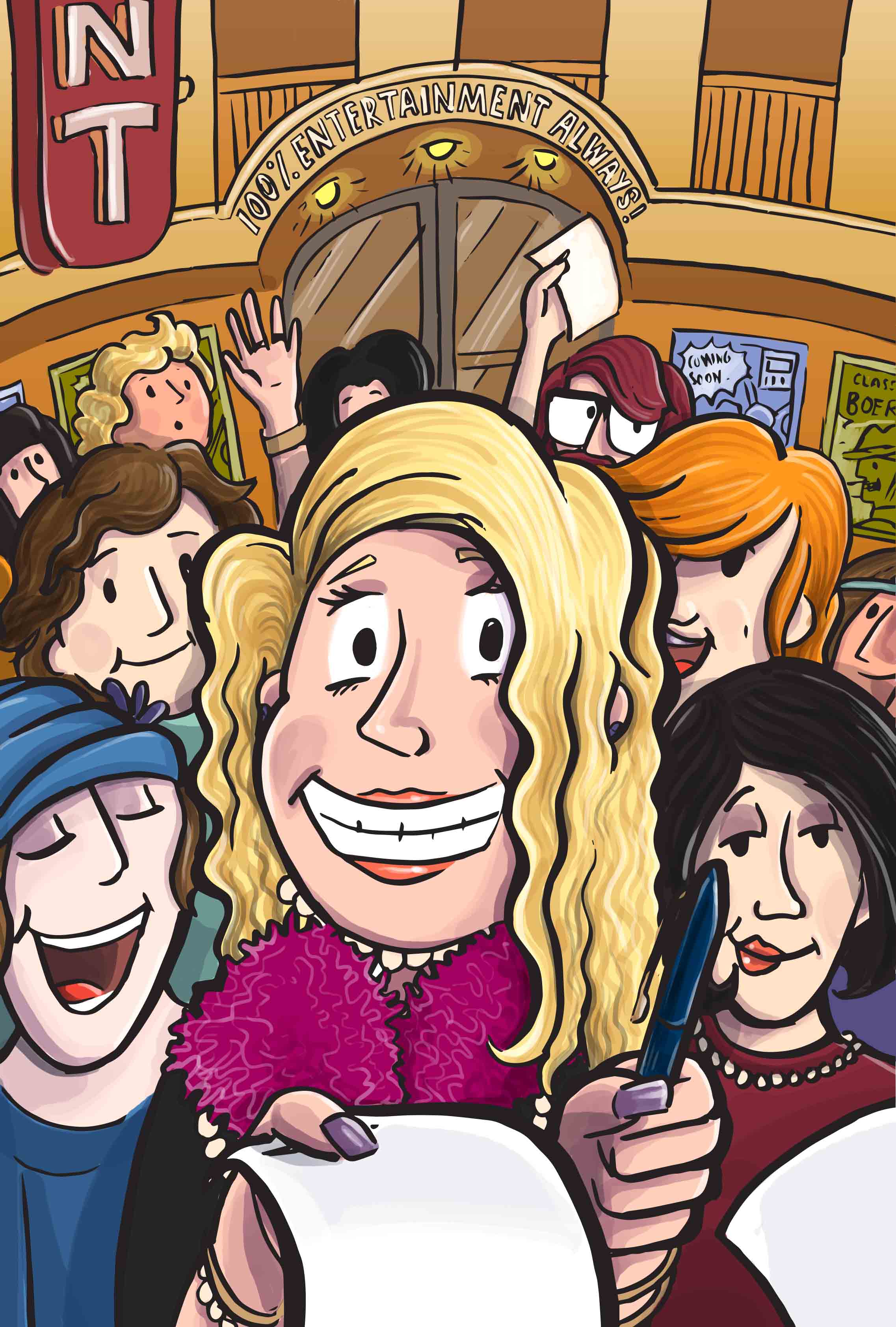 The machine pops, squeaks and fizzes, and you find yourself leaping aside to avoid the wooden wheels of a boxy Ford Model T motor car as is trundles past you up Rundle Mall… no, wait, Rundle Street, according to the signs. The driver honks his horn.

“Cars!” gasps the Professor, fidgeting with the time machine. “At least it’s moving us in the right direction. Let’s see, my guess is about twenty years on, sometime in the 1920s…”

He points at the legs of a woman passing by, as she puffs on a cigarette in a long holder.

Before you can ask what this means, you’re startled by a loud shriek from the entrance to Regent Arcade.

A woman covered in long strings of pearls is pointing at you, her hand over her mouth.

A gaggle of women rush to her side and stare at you, their mouths open wide, as you stare back, your mouth open even wider.

The Professor looks at you, confused. You stare up at the ornate front of Regent Arcade, and the archway above the entrance adorned with the words ‘100% ENTERTAINMENT ALWAYS, THEATRE MAGNIFICENT, CLASSIC BOER WAR FILMS’… wait a minute…

Wide-eyed women has crowd around you, proffering pens and small printed pictures. You take one and stare at it. It’s a blurry photograph, black-and-white, like a scene from a Charlie Chaplin film. It’s of a person with a look of utter confusion on their face, in front of a parade of soldiers, being grabbed by a Sergeant-Major. It’s you!

“Of course!” the Professor exclaims, snapping his fingers. “Its front looks the same, but it’s not Regent Arcade yet, it’s still the Regent Theatre… the grandest and most extravagant movie theatre in the whole of Australia! Movies are the biggest thing in the world right now. Remember the cinematographer? He must have been making a war film, and you…”

He takes one of the ladies’ pictures and holds it up, triumphant.

“You must be a silent movie star!”

You look at the expectant faces of the women around you. You swallow, nervously.

There is an awkward silence. Their faces fall. One short woman coughs.

Then she says, in a disappointed voice, “Is that how you really talk?”

A man in a suit and tie steps through the crowd.

“My dear friends, if I’d known we had movie stars in town I’d have welcomed you myself! Please, allow me to accompany you to Parliament House, where I’m sure the other members would be pleased to meet people of your calibre!”

“Professor!” you grab his arm. “Why do you follow every suggestion without thinking? We need to fix the machine! Shouldn’t we go somewhere where someone can help us, like… the University?”

The Professor gestures to the politician as he follows him towards Charles Street. “But we’re stars here! We might never have this opportunity again! Besides, I’m sure the worst of the time machine’s malfunctioning is over!”

You can see he won’t be persuaded, but do you think it’s safe to leave him?

Elder Hall (1925->1908): Decide the Professor is nuts as well as unreliable. Then grab the time machine from the Professor and head towards the University on North Terrace, stopping at Elder Hall.