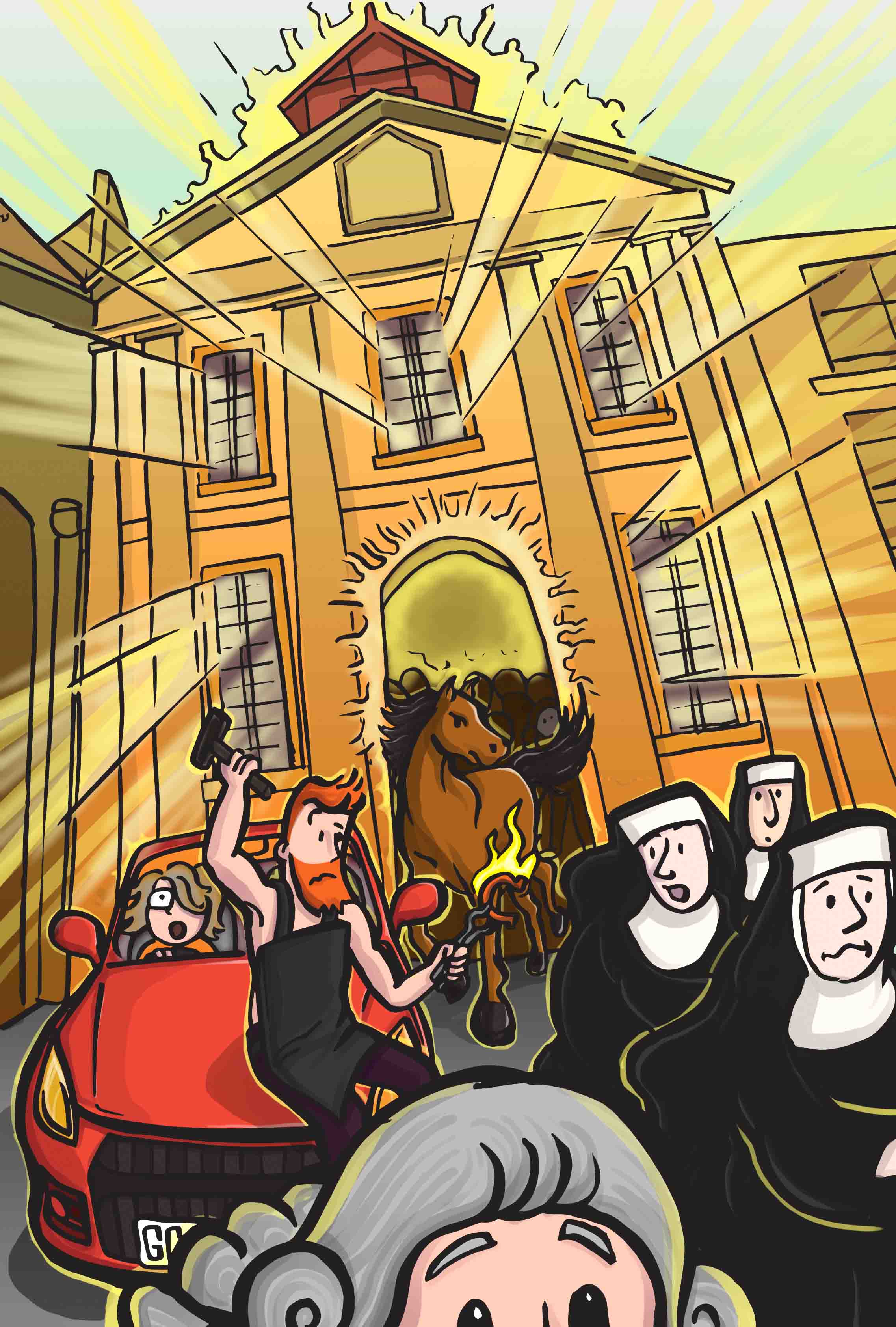 You arrive at the Queen’s Theatre to bright flashes of light shining out of the entrance, and screams and squeals from inside. Darling must have tried to use the machine!

All manner of characters come running out: men in long black cloaks and powdered wigs, a crowd of screaming nuns, a blacksmith with his hammer still in hand, a horse and finally a very confused-looking old lady driving a Suzuki Swift. As the vehicle vanishes her car antenna snaps off, tinkling to the ground.

The Professor picks it up and points at the big, heavy, freshly-painted doors of the building.

“It’s the time machine, it’s gone haywire, sending people back and forth through time! This place must have been all sorts of things over time, a theatre, a courthouse, a market bazaar… even a carpark!”

A strange man with curly hair and a white beard, his face covered in black soot, staggers out from inside the theatre.

“Ruined, ruined!” he moans, and throws his head back, theatrically.

“What happened to your face?” you ask. “Did something explode?”

The man slaps his brow. “No, no, no, my name is John, John Lazar, I’m just playing Othello. Or at least I was, until that infernal machine ruined my opening night.”

He points, to where the horse is now sniffing something in the dirt at the base of the column to the right of the theatre doors: the time machine!

The Professor rushes to inspect it, as John Lazar moans and staggers about.

He stares out at the township: it can’t be more than a few years since the founding of Adelaide, it looks more like a ramshackle village in a Wild West movie than a city.

“They’re all leaving town for the gold rush. I can see it now, a city with no art, no theatre, no festivities. What a waste.”

You clear your throat. “Actually, I don’t think you should worry about that. I have a feeling Adelaide will be a great festival city.”

His eyes brighten. “You think?”

“Oh yeah,” you say. “I’ll bet there’ll be dozens of theatres, and festivals every year, where people come from all around Australia to watch hundreds of shows.”

Lazar grins at the thought.

“Quick!” hisses the Professor, the machine buzzing in his arms. “I think this thing’s about to go off again, we need to get to open space.”

“Hey, I think I just inspired him not to give up on his dream!” you say proudly.

“Who, Lazar?” says the Professor, looking back at him. “No, he quits the theatre and goes into politics.”

“Oh,” you say, a little disappointed.

“Forget that!” he says, trying to connect the car antenna to a wire on the machine.

“Where do we take this thing where it’s not going to warp the course of history and blow things up again? Light Square’s closer, but Victoria Square’s bigger. What do you think?”

Light Square (1841->1892): Take it to Light Square, a more immediate yet potentially too small location.

Reconciliation Plaza/Tarntanyangga (1841->40,000 BC): Take it to Victoria Square, the further, yet potentially safer option. You better hurry then!