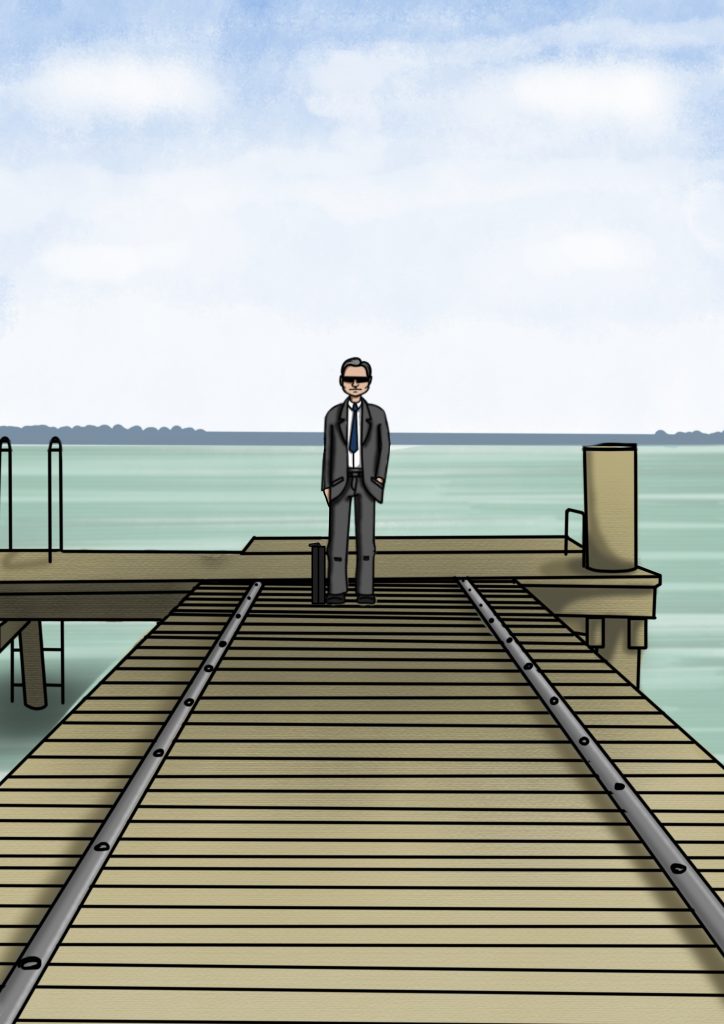 The jetty looks serene, the kind of place that would be idyllic in the summer. Right now, you can see the Commander’s shining black limousine parked at the road. He’s standing at the end of the jetty. Just himself, alone, without any backup, a briefcase by his side. An odd choice.

The Commander is a tall man in a black suit, with salt-and-pepper grey hair, and glasses that conceal his eyes.

You have the crystal in your hand when you say, “Commander, they’ve been using it to drain people’s energy. We don’t exactly know who THEY are yet, but–”

He gives you a smile full of teeth. “Yes, yes. Now hand it over.”

“Stop!” Lang growls. You freeze, and then you see that the Commander is has a gun.

“You’re so close to retiring, Agent Lang. Why mess it up?” says the Commander

Lang says, “That needs to be destroyed.”

The Commander looks away and says, “Ah. Excellent timing.”

You turn, and see the two men shuffling across the oval towards you. They look like the walking dead. Alive but barely conscious. Perhaps they only got a half-dose of what killed Manley. Their leader is with them – she is a vibrant woman who towers over everyone else. Her eyes gleam with a strange blue light like twin stars. You realise now why she looks so powerful in comparison. She’s absorbed their lifeforce.

They are holding an alien machine. Oblong, made of an obsidian metal, with a slot in place for the crystal to expand its power. It’s the last piece that would make the device fully operational. One of the followers opens his mouth, but it’s her voice that speaks through them: “We’re here for the transaction.”

“Of course,” says the Commander. “I’ll even throw in these two agents as a bonus.”

The Commander bends as if to open the briefcase at his feet. But it’s a feint, he uses the moment of distraction to calmly shoot the drones and their leader.

“Sir?” you say, as he walks over and retrieves the device from the woman’s body.

You’re still not sure if he’s on your side.

“The real prize. Well done, recruit,” he says. He removes his sunglasses. His eyes appear normal.

“What are you gonna do with that?” asks Lang, pointing to the crystal.

The Commander slots it into the device and it hums as it charges up.  “Come on, Lang. Be reasonable. They were playing a small game. They didn’t know what it was truly worth. With this technology think of the mass control we’ll have!”

“No,” says Lang, gritting his teeth. “Our job is to protect.”

“Agent, if you’re going to get in the way, I’m going to kill you, too. Be sensible.”

Lang has already drawn his raygun, but the Commander is the faster shot. He falls to the ground. You rush to your partner’s side.

The Commander looms over you. “It’s a shame you killed your new partner so close to retirement. You were unstable. Untrustworthy. What a shameful end to a career.”

He shoots you too.