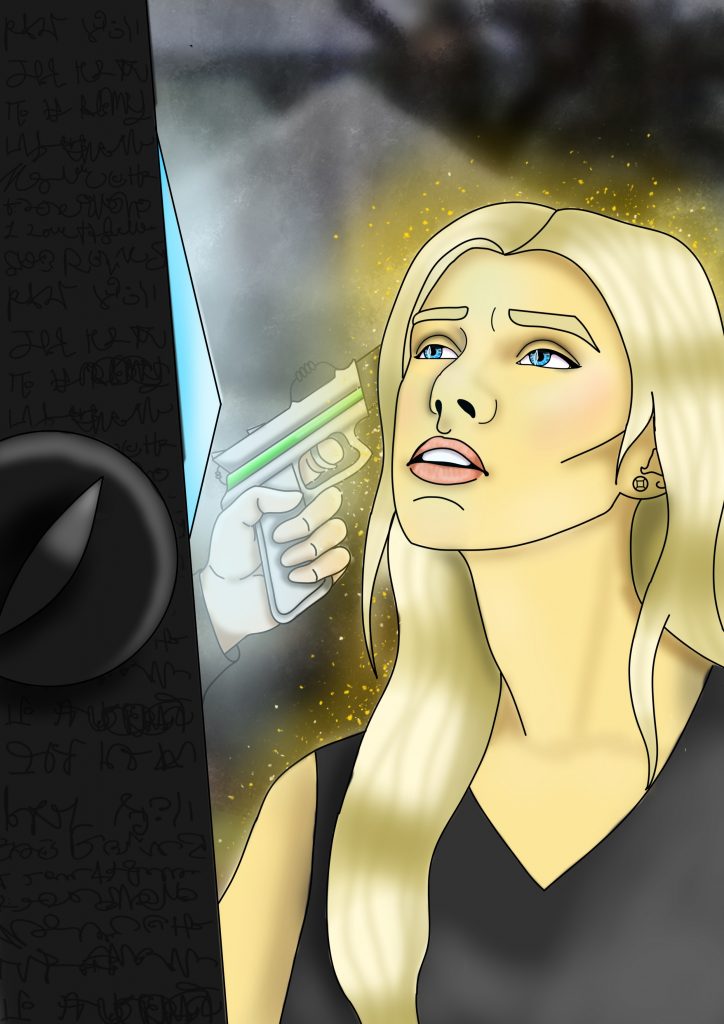 The green lawn slopes downwards towards the shore and the flat expanse of the lake seems to disappear into the far distance. Water birds flock there. Tall trees overshadow the lawn area and gazebo. As you hide at a distance in the shadow of one of the trees, you see there are people milling around, all lifeless and pale-faced. Some slump on the ground.  Near the gazebo is an alien machine made of obsidian metal and covered in runic carvings.

A woman stands near the machine; the central focus of the congregation. She is much taller than anyone else and her skin radiates with energy. Despite her healthy glow, her expression is tense and sad.

You peer further around the tree and see an agency limousine parked there. Lang stops you revealing yourself with a warning hand on your shoulder. A man in a dark suit, with greying close-cropped hair, and glasses stands near the strange woman. It’s the Commander.

Despite your caution, he’s already spotted you. He calls, “Agent, hand over the crystal.”

It’s then that you notice the raygun the Commander has pressed into the woman’s back. You glance between the Commander and the stranger. It doesn’t look like he’s arresting her. More like he’s holding her hostage. “Sir? What’s this about?”

“This machine was once used to store the energy of dying stars. Isn’t that correct, Astrid?”

The woman, Astrid, barely moves her head as she replies in a tense voice, “Yes. We used it to save entire galaxies. It could save your planet, even as you strip it of its resources.”

The Commander shrugs. “Perhaps they don’t deserve it. I find the devices properties of mass control far more appealing.” Then he holds out a hand towards you. “The crystal. Hand it over.”

As you whip out your own raygun, Astrid’s fingers move across the machine with the delicate motion of a piano player. All of a sudden, the crowd of people slumbering near the crystal rise to their feet in unison and with the speed of a pack of lions, surround you.

“You killed Agent Manley,” your voice comes out less steady than you’d like. “The Agency won’t put up with this.”

“And then she got you involved. Foolish. The Agency follows my orders. And now the whole planet will follow them too.” He presses the gun to Astrid’s temple. You’re not sure if he’d really shoot her but you don’t want to find out.

Her bright, clear gaze bores into your own. She says, “Please listen to him, Agent. We can stop all of this right now. Give me the crystal.” She holds out a hand.

You glance between her and the Commander. You get the sense that she’s trying her hardest to communicate something to you, a wordless imperative, a plan.

It might be a risk, but your Commander has already betrayed you, how much worse could it get? You take a step forward, unwrap the edges of Agent Manley’s jacket, and give Astrid the crystal.

“Easy,” the Commander says, pressing the cold metal of the raygun against Astrid’s head.

Her hand moves towards the controls and slowly turns a knob on the side. A strange ringing sound echoes out. You can see the crystal glow as more and more energy is transferred into it. The breathing of the sleepers slows and evens out. You wonder if they’ll wither and die.

But then she clamps both hands on the crystal, and doesn’t let go.

“What are you doing?” the Commander barks.

The light from the crystal flares with the brightness of a miniature sun. You dive for cover as the Commander is flung back. The strange singing rises to an ear-splitting frequency and the crystal explodes.

It takes a few minutes to get to your feet, a faint ringing in your ears. Most of the affected people were out of the blast radius. The Commander and Astrid, however, were not so fortunate. The Commander has been burned to a crisp. Nothing at all remains of Astrid except a scorched outline of a shadow near the gazebo, and the crystal itself, now dead black and with a crack running through the middle.

Lang limps towards you and puts a steady hand on your shoulder. “Good instincts, kid. We’ve got a lot of cleanup to do.”