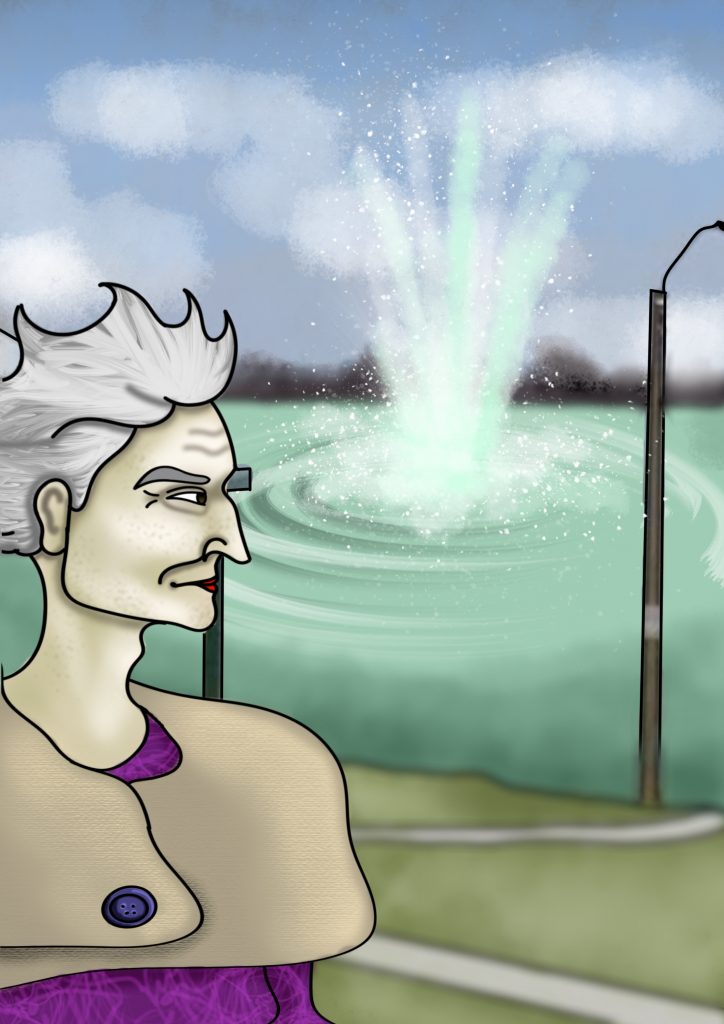 You’re hiding behind the obelisk, the three of you concealed underneath the cloaking shield Hex used on her ship. Through the transparent film, you can see the gazebo nearby and the green sloping lawn that leads down to the lakefront. You glance at your intergalactic watch; it’s less than 30 minutes until the attack is supposed to happen.

Two men approach the lake’s edge, wheeling a trolley loaded with twelve small canisters which they start to unload into the water. The canisters are smaller than a shoebox, oblong, and made of a dull black metal that seems to absorb the light rather than reflect it.  Their movements are clumsy as they fumble with the canisters. From their shambling gait and emotionless expressions, you assume they must be infected with this parasite Hex described.

“What is this?” you whisper to Hex. “You said this was just the drop off site. You lied.”

Agent Lang pulls out a pair of handcuffs.

“What are they doing?” you demand.

“The lake connects up with the rivers. They’ll use the water to send all their beasties into every home in this town. It’ll get into the water table and the rivers, infecting the whole country.”

“We have to destroy them.”

Hex gives a deep sigh. “Fine, I have a trick or two.” From the folds of her endless cardigan she produces a tiny device. It’s a silver sphere about the size of a golf-ball, with a small screen set into the top. In her other hand she has an orange buttoned device, a detonator.

“That’s an echo bomb,” says Lang, his eyes narrowing. “That’s banned in at least three star-systems. How did you get it?”

“I have my sources. But you know what it does. Works on any nanites, like their parasites. Once a canister breaks open, it spreads to the next. There you go – a chain reaction. Sneak it in with the rest of their cargo in the water. Good plan, hey?”

Lang sighs as if he resents using illegal equipment. “Hand it over.”

From the storage underneath her walker, Hex produces an empty canister like the ones the workers had.

“Ah – first, I need some security,” she says, “A ticket off this planet in exchange for my help. Deal?”

She holds back the empty canister and waits. She has you over a spaceship on this one. “Fine. Deal.”

You open the remaining canister and you slowly reach your hand in to set the bomb. Just as Hex puts in a code on her detonator, you hear footsteps behind you.

A solid knock to the head has you seeing stars. The cloaking shield falls away and you are under attack by the two infected. An infected worker tosses you to the ground as if you’re a mere irritation. He looms over you, fist raised, ready to strike – and then he is nothing but ashes.

You blink in surprise.

Hex vaporises the other worker strangling Lang. Then she puts her disintegrator ray back into the storage compartment of her walker.

“Thanks,” you say uneasily, as she helps you to your feet.

“Just let me press the button, dear,” she says. You hobble to the lake side and drop the canister on top of the others beneath the surface. After taking several big steps back, Hex detonates the device.

The lake bubbles. Waves lap at the shore and steam hisses up. You can hear a crackling noise and feel the ground rumble as the shockwaves echo across the lakebed. Boom, boom, boom…  the sound of one canister exploding after another goes on for at least ten minutes. There must have been hundreds of parasite nests down there.

Hex grins. “I love the sound of a plan going perfectly.”

Finally, it’s silent; in a chain reaction, the canisters are ash. It might take a few weeks to track down the rest of the townspeople who are infected, but you’ve managed to stop a much bigger invasion.