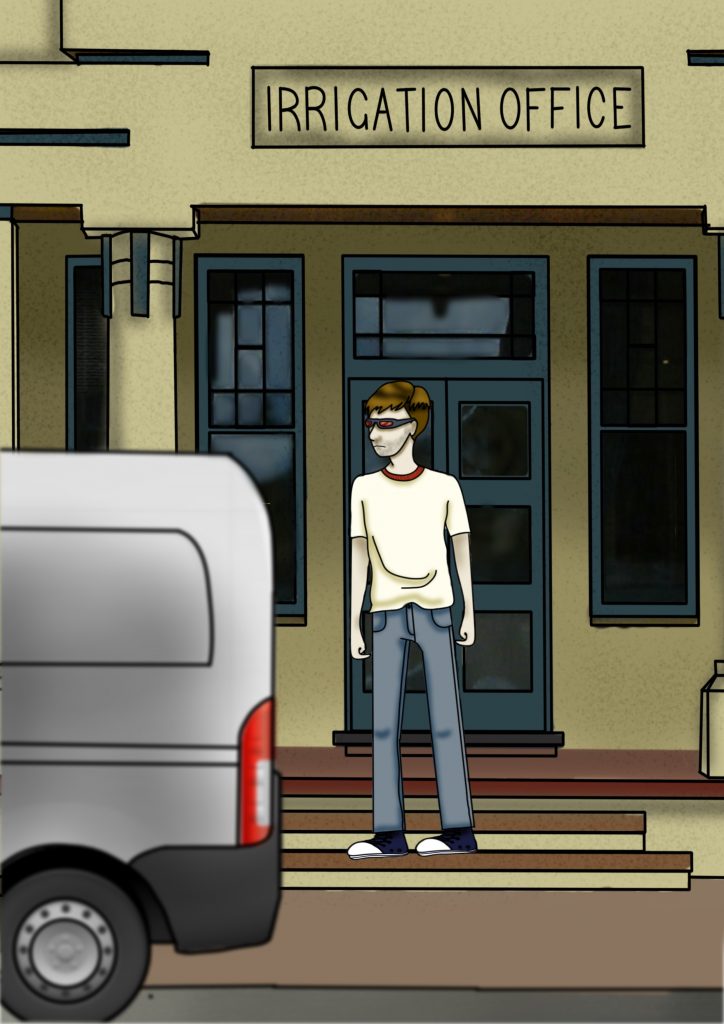 You’re hiding behind a low wall that surrounds the front gardens of the Irrigation Centre. A series of steps lead up to the grand art deco entrance, framed with pillars in a dark green trim. There are some people going in and out. All wearing sunglasses, even as they head inside. A white van approaches the front of the building. Two workers hop out and start unloading it.

You can see this is no normal delivery. The cargo consists of canisters with carvings in an alien language. They’ emit a humming noise and glow faintly. The sound of it tickles your ears and borders on headache-inducing. The workers move with a shuffling gait as if they’re being operated by clumsy puppeteers.

The heavy wooden double doors open and you see a man emerge. He’s wearing a rumpled t-shirt, jeans, and a pair of wraparound polarised sunglasses which he finally removes. His eyes glow a bright blue, just like the postman who was infected. He leans over and inspects each canister as it comes through. You tune in your earpiece, which also acts as a directional amplifier, to eavesdrop.

The garbled alien language is translated to English. “….excellent. We deliver to the water supply tonight. Then to the rest of the Riverland next week.”

Dawn Edwards was right about the timing. They’re planning to dose the town with the alien parasite. You have to get back and tell Lang straight away –

But as you reach for your communicator, your hand comes away empty.

“Missing something?” says a voice. It’s the woman from the funeral – Astrid Crane. She’s smiling at you and her eyes are glowing with that same intense blue light. She crushes the communicator in one fist with inhuman strength. “The Agency sent a recruit to do an expert’s job. What a shame.” She grins. “Don’t worry. You’ll be a valuable asset to the Hive.”

Before you can reach for your holster, she grabs your arm. Two workers surround you and hold you down. She leans over you. “Now. Hold still. It only hurts for a moment.”

She opens her mouth. Something spiked and black emerges to scuttle across your shoulder.