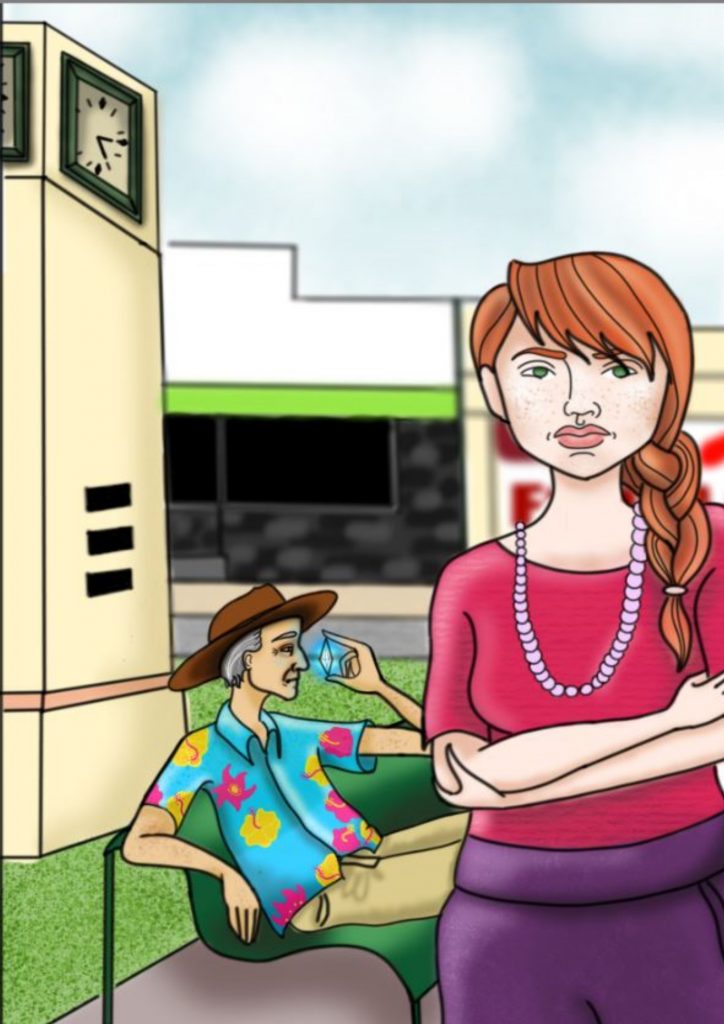 You’re standing next to the clock tower. It’s an old art-deco monument with a pink trim around the base and some park benches nearby. You are struck by how still it is around you.  Not the peace of a country town but the silence after a bomb.

Near the base of the tower you notice something glittering. You pick it up. It’s a tiny broken piece of crystal that shines with a faint blue glow when the sun hits it.

Lang snatches it out of your hand. Before you can stop him, he licks it. His eyes narrow like a winetaster analysing a complex bouquet. “Hmmm. Definitely not quartz.”

“What if it’s extra-terrestrial?” you ask in horror. “Didn’t you watch the safety videos?”

Lang pulls out his scanner and examines the crystal. “You’ll deal with worse than that, mate. Serve as long as I have, and you develop a pretty strong immune system. Look at this!” he says as the scanner beeps. “It’s an energy crystal. They’re used in a lot of alien tech.”

“Sometimes. I can’t tell where it’s from, but it’s been broken off. The energy’s been drained.”

“Could you use it on a person?” you wonder. “To, say, drain them to the point they’re a prune?”

Lang’s eyes narrow. “Maybe with a big enough crystal and the right machinery.”

An idea occurs to you. “If this is a fragment, could we use it to trace the original?”

Lang smiles. “You’re a keeper! Well done! Let me find the crystal’s frequency… Aha!” There’s an odd beep and Lang frowns at his scanner. “Huh. That’s weird. I’m getting a lot of interference from… another agent’s communication beacon. But we’re the only ones… whoop, nope, it’s gone. Must be an error. This thing’s bloody useless…” He jabs at it with a finger.

Just then, a woman approaches you. She has long red hair in a plait, wears yoga pants, and a string of beads around her neck.

“Hello there, I haven’t seen you two in town before. Just visiting?” She smiles but there’s wariness in her eyes.

“Just on holiday with my uncle,” you lie.

You try to keep your expression neutral as you realise this must be Dawn’s sister. They have the same red hair. “You knew Dawn, then. I’m sorry for your loss.” You realise as soon as you say it that you’re being too familiar.

Her expression turns cold. “Yes. Sorry, I have to go now. Perhaps you might be interested in our healing sessions at the church.” She basically flings a pamphlet at you and makes her escape.

Uniting Church: Go along to Beryl’s ‘healing session’ at the local church? You’re certain she knows something and maybe with more prompting she’ll tell you. You continue downhill along the main street away from the information centre, until you reach Nookamka Terrace at the end. Turn left onto Nookamka Terrace, continue until you cross Ritchie Street to get to the Barmera Uniting Church on the corner.

Country Music Hall of Fame: Beryl could be trying to distract you from the real clue in your hand. The signal from the alien crystal is a much stronger lead. You decide to follow Lang’s co-ordinates to find the original crystal… Go back uphill along the main street, Barwell Avenue. Near the roundabout, turn left onto Scott Avenue, then cross the street safely to reach the Country Music Hall opposite the Information Centre.