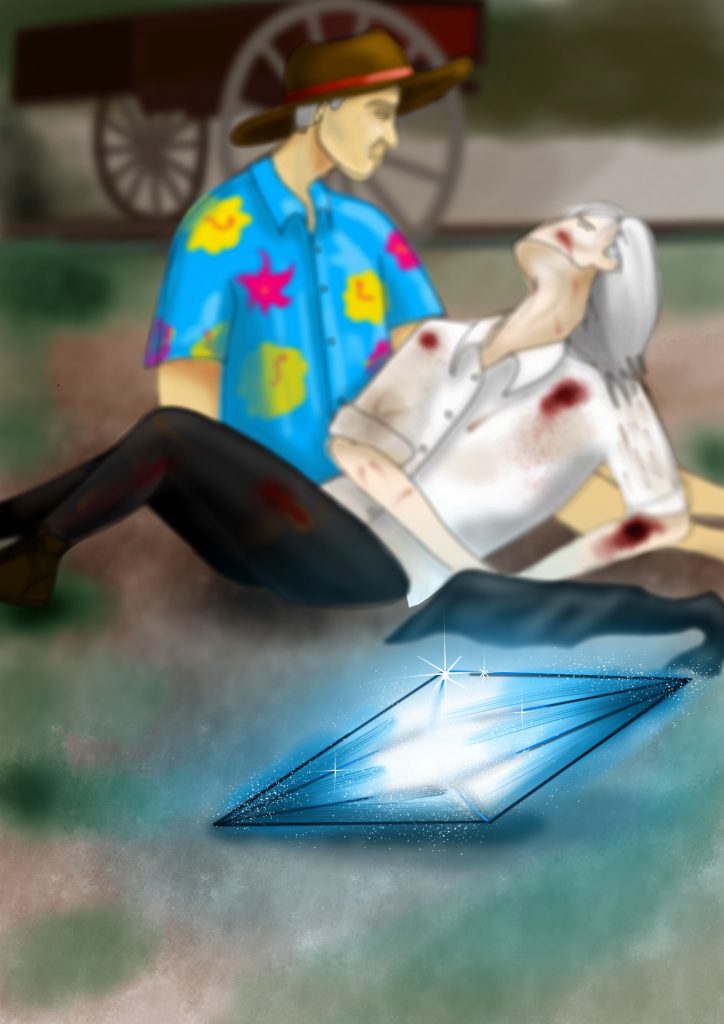 The Country Music Hall has old wagon wheels and rusted equipment as sculptures in the garden. On the front of the building is a placard with guitars and an old Akubra hat. If it had corks on it, it would almost look like Agent Lang’s costume.

“A proud institution,” says Lang. “This is why I really took this job. I just love country music.”

You’re not sure if he’s kidding or not. Lang has the best poker face you’ve ever seen. Maybe the real reason the Commander wants to retire him is because he won’t stop playing country in the office.

“Is the crystal inside?” you ask.

Lang stops and frowns again. “Damn it, this bloody thing’s doing it again. Here, you know technology, fix it for me.” He tosses the tracking device to you.

The crystal’s signal is there, but it keeps flickering and jumping about. You play with the signal amplifier and the crystal’s location sharpens, but it’s overlapped by a second dot on the map. An Agent distress signal.

“Do you know an Agent Manley?” you ask.

Lang freezes and then speaks as though he is forcing words through numb lips. “That can’t be right. Agent Manley was my last partner. She was killed three days ago on a mission in Cairns. How could she be here?”

You barely manage to say, “It’s coming from around the back.” When Agent Lang takes off at a run. You dash around the back of the building which is an overgrown garden area littered with rusted farming equipment.

Then you spot the dirtied and bloodied white fabric of her shirt in the long grass where she’s collapsed.  The Agency jacket lies discarded on the dirt. Her hands are shrivelled and wrinkled, and her hair is snow-white. Her breath comes in laboured gasps. She’s been drained, just like Dawn. Clutched in her hands is an enormous crystal. It’s glowing faintly.

You go to yank the crystal from her hands, but Lang holds you back. “Don’t touch it! Look at me, Manley…” He shakes the Agent’s shoulders and she turns her head to look at him.

“You’ll be right, love,” says Lang in a firm tone. “Just hold on.” But his lower lip is trembling, and you can see the expression of defeat in his eyes. It’s a lie meant to reassure the dying.

Her eyes roll back in her head. “They have a… machine. It uses this crystal to drain energy. I tried to … take the crystal out of range, but it’s too strong…. They’re at the park, near the gazebo. They’re going to drain the whole town… have to stop them! Take it!”

She rolls the crystal away from her, then slumps back to the ground. You quickly wrap it up in her discarded jacket, careful not to make direct contact. Even through the fabric you can feel the faint hum of energy.

She whispers with her last strength, “We’ve been compromised, from inside….”

“Compromised? By who?” Lang barks.

But her eyes go glassy and she falls still. Lang turns his face away. He’s in no state to help. It’s up to you. You call the Commander with your transmitter.

“Yes, what is it?” he says impatiently.

“The threat is going to strike at the park, sir, should we –“

“Don’t send the crystal into danger! Meet me at the jetty on the lake. I’ll be there soon.” The Commander cuts off.

Danger is imminent, and you’re supposed to do nothing? There’s something fishy going on.

Lang wipes his eyes with the back of his hand and says in a wobbly voice, “Where do we go?”

The Jetty: Follow the Commander’s orders and bring the crystal to him and out of harm’s way? Surely, he’ll explain more when you get there. Go downhill along the main street, Barwell Avenue, turn left onto Nookamka Terrace, then continue until you reach the intersection at Ritchie Street. Turn right down Whitmore Avenue, and continue until you reach the jetty at the lakeshore where the Commander is waiting for you.

Riverfront Park: Intercept the strike in the park Agent Manley told you about? You need to stop their plan to drain the town. And besides – you’re not sure if you trust the Commander. Go downhill along the main street, Barwell Avenue, turn left onto Nookamka Terrace, and cross Ritchie Street. Continue on Nookamka Terrace until you reach the next intersection, then turn right and cross the road safely onto Pascoe Terrace. At the end of Pascoe Terrace, cross Dean Drive to reach the lakefront park with the gazebo and sculpture of an orange.