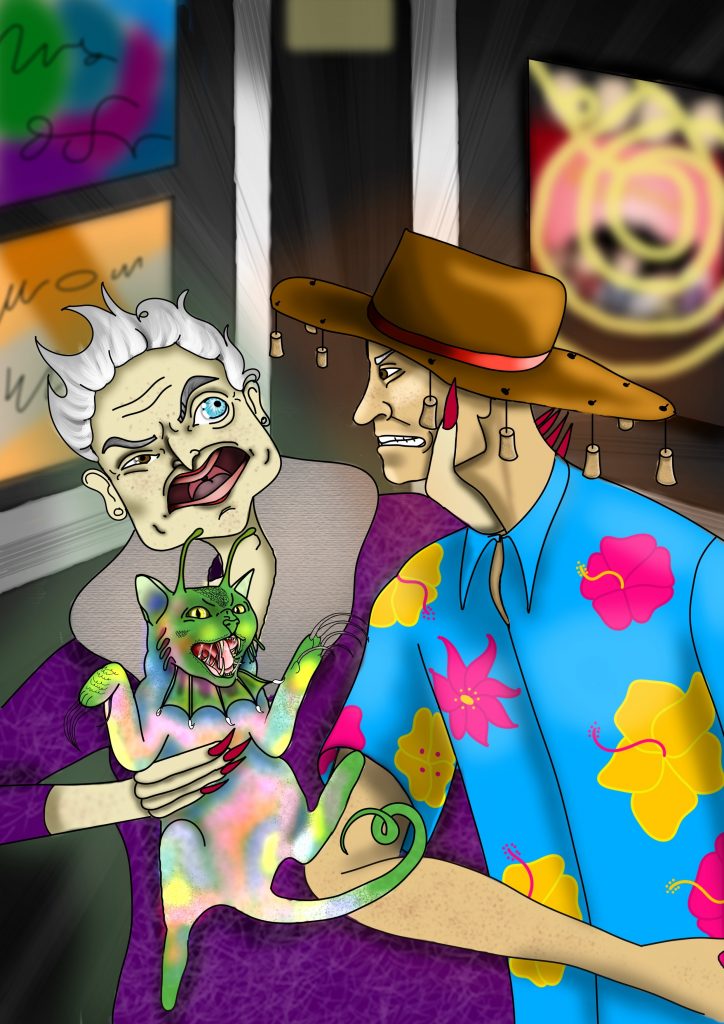 Hex is zooming past the wide double doors when you reach the theatre. Her eyes dart wildly; one of them is normal, the other is electric blue and rolls around, bulging out of her face. Her skin quivers. The cats morph, becoming scaly and iridescent. You realize this is not a very convincing old lady – but she’s already pushing her walker way with inhuman speed.

Lang’s still a pretty good runner for someone in his 60s. He catches up with her and delivers a flying tackle like a rugby player. They are knocked through the double doors and posters for the latest play are scattered to the floor. The old lady has a clawful of his shirt and spits out bits of gravel. You back away and there’s a metallic thud as you hit something parked next to the theatre building. Something invisible and solid. You reach out a hand and feel the cool touch of metal. Another touch and an invisibility cloak falls away to reveal a spaceship. It’s painted red, with yellow stripes. She’s been planning to make her getaway.

Agent Lang is losing the battle against the old lady’s inhuman strength, as she tries to plant an alien cat on his face. You even the odds by pulling your silver stunning ray from its holster. Your green laser knocks her to the ground.

Lang gets to his feet, panting, and pulls the cat off him as it tries to suck his blood.

When Hex comes to, both you and Lang are waiting for her. “You’re under arrest by the Australian Extra-terrestrial Protection Agency,” you say.

“Yes, yes,” she mutters, glaring at Lang. “Got a few grey hairs, eh?? This new blood is a better shot than you.”

“You’re not looking so flash yourself,” he shoots back.

“Arrested her for a pyramid scheme on Rigel 7,” says Lang, “Then at a fake warehouse on Betelgeuse selling synthetic alcohol. What is it now, Hex? Profiteering from an alien invasion?”

“I was minding my own business,” she whines, “This is harassment!” Her skin bulges with the exhaustion of trying to appear human.

“Mind telling us why you were hanging around the funeral of a murder victim?” you ask, arms crossed.

Her one good eye narrows and her hand twitches as if in search of a weapon. “What murder? I was just about to leave this planet. Not enough alien nightlife.”

“Don’t play dumb. Everyone’s talking about it. Except you. Leaving town.”

“I’m not a killer!” Crimson Hex protests, and Lang snorts.

“Depends how much you’re getting paid, right? So, why are you here?”

She runs a spongy tongue over her toothless gums and blinks. Then she says: “Shipping. That’s all. I decided to leave before things got complicated. On my honour!”

“Rather you swear on your money,” says Lang. “Who are these shipments for?”

She shrugs. “Crane. She’s moving canisters of stuff. I didn’t ask, they didn’t tell. I dropped it down at the lake, near that big obelisk.”

“Are you sure you don’t know?” you press. “We could make it worth your while.”

Hex tilts her head, as if deciding. Then she shrugs. “I may have taken a tiny little peek at the cargo. Looked like a parasite egg nest to me.”

“Let’s go,” you say, only to be cut off when Hex grabs your arm in a wrinkled claw.

“Now, sweetie, don’t be so quick,” she says, with a smile. “You told me it would be worth my while. I can show you where they actually store these beasties.”

Obelisk: Make Hex show you the drop-off point at the obelisk? You’re not sure you trust this old con. Why wouldn’t Crane get the shipments delivered away from their storage area? Something doesn’t seem right. Walk downhill along the main street, Barwell Avenue, turn left onto Nookamka Terrace, and then turn right onto Whitmore Avenue. Continue along Whitmore Avenue towards the lake, until you get to the obelisk at the lakefront parking lot.

Masonic Lodge: Follow Hex to the storage location? Dawn said their plan would happen in the next two hours and you don’t have time to investigate slowly. You decide to take a risk. So, you go back uphill, turn left onto Langdon Terrace, and go past the church to the Masonic Lodge next door.