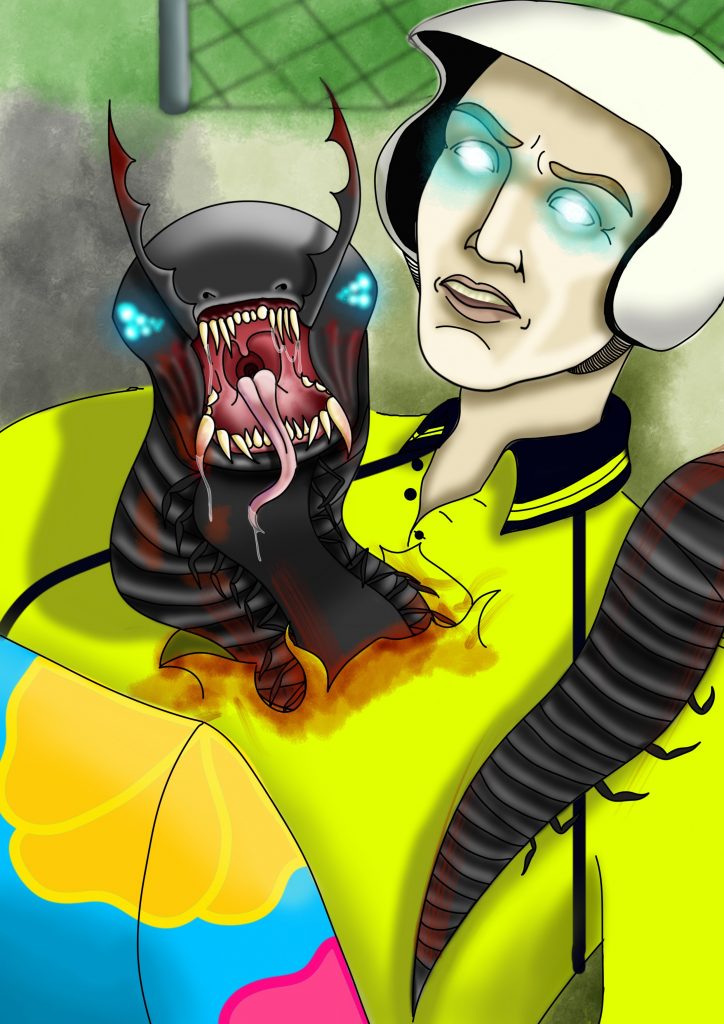 You lost sight of Astrid on your way to the oval. Unfortunately when you get there, she’s nowhere to be seen. As you go through the gates though, a man staggers towards you from the right. Something about him feels wrong. Is it a trap?

“…help…”His face is white and pained.

Lang’s sharp gaze is scanning the oval around you.  You realise you’re out in the open here and visible from miles around. You’ve clearly lost Crane, but something still isn’t right.

“What’s wrong?” you ask. “Have you…. Seen anything strange?”

The man clutches his chest and falls to his knees. You break free of Lang’s grasp and rush to his side. Sweat is beading on his face and his skin Is unnaturally pale.

The man focuses on you. There’s a faint light of hope in his eyes. “Y- yes… I was up at the – the irrigation office. I’m just a postie …” He cuts off, breathing shallow.

You realise Lang is standing over you with one hand near his raygun and it’s making the man nervous. You shoo him away.  “Then what?”

“Everyone… wearing sunglasses. It was weird. They were shuffling around like zombies. Saw what they were…” He curses and doubles over in pain. He’s not seeing you any more. “Someone grabbed me. Held me down. It was horrible. My chest hurts. I can feel it crawling– Get away!”

He shoves you suddenly and you sprawl to the ground.

The man’s eyes roll back in his head. When he opens them again, they’re glowing with a strange blue light.

Lang knocks you aside and suddenly he’s struggling with the man in the dirt. You blink, convinced you’ve had a knock on the head, but no, there is definitely something black writhing around between them.

There’s a brief, scuttling flash of claws. You try to shoot at it, but miss. It’s hard to see in the blur of movement.

You fire again. You think you’ve got it. It’s clawed and thin and covered in legs like a millipede with a pair of sharp pincers at the head. The dust takes a while to clear. Lang has gotten to his feet and is standing over the man, panting. You can see that the poor postman hasn’t been saved, he’s lying still.

Lang doesn’t look at you. You approach him with caution. “Are you okay? Did I get it?”

He tilts his head and seems to come out of his reverie. When he looks at you, his eyes appear normal, but for just a second you think you see a shift in his expression, like something dark rippling underneath the water of a pond.

“Why don’t you wait here,” says Lang, in a calm voice moving towards you. “And I’ll go to the irrigation centre.”

You a step back to keep your distance. “Or I could go to the irrigation centre, and you call in for backup, we don’t want to take the risk that thing is contagious.”

Lang grins. But he’s lost that larrikin expression. His eyes have a cold and calculated look. You’re suddenly not so keen on him following you. “Oh, no, I’m not letting you go all by yourself.”

Irrigation Office: Insist on going to the irrigation office by yourself? If the parasites are coming from there, you want to stop them without Lang following you. Casually, you reach out a hand, as if to clasp Lang by the shoulder, but instead use the butt of your ray gun to knock him out. At least you hope you did, you couldn’t bring yourself to hit as hard as you did in training. Go back through the entrance gates of the oval, down Langdon Terrace, past the church, and cross Fowles Street to the Irrigation Centre.

RSL: Let Lang go, and then follow him to see what he’s up to? There’s no way you’re waiting around on the oval to be ambushed. You follow him through the oval entrance gates, turn right onto Sims Street, cross Scott Avenue safely, and onto the right-hand side of Sturt Street. Follow Sturt Street all the way downhill, crossing the intersections of Hague Street and Bice Street, until you reach the RSL at the end on the right.