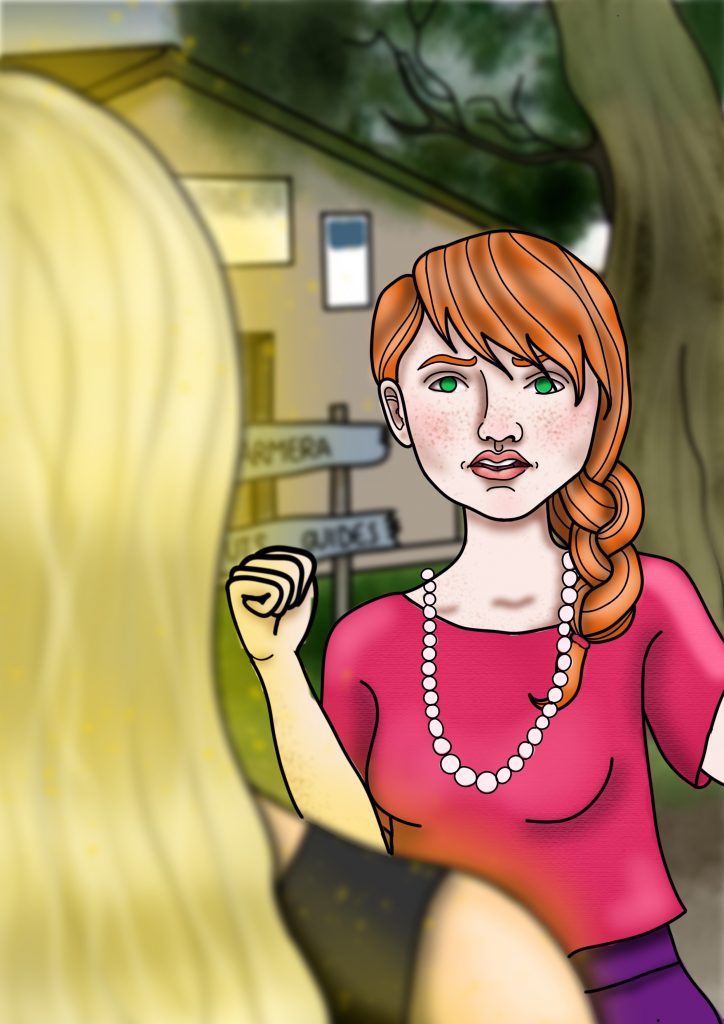 The Scout’s Hall is bordered by a low wooden fence and some gnarled old trees. The small windows are shuttered, preventing you from seeing what could be happening inside.

As you get closer to the building, the door opens, and someone walks out. It’s Beryl, holding a large crystal in her hands, about the size of a tub of butter.

She starts at the sight of you and backs away. “Why are you following me? What do you want?”

You put your hands up in a peaceful gesture. “We need your help to investigate Astrid.”

“W-what? But she hasn’t done anything wrong. Who are you?”

“ASIO,” you lie. It’s close to the truth. Close enough.

She’s still staring at you in disbelief. A shadow of fear crosses her face. “Is this about my sister?”

“We know Dawn disagreed with Crane,” you say. “We think she might have… discovered something. Do you know anything at all?”

Beryl is shaking her head in disbelief. “No, you’re lying!”

“Have you been feeling tired lately? Aren’t people acting weird? Not themselves? Not just your sister?” You press further. “How long have you really known Astrid?”

You press your hunch. “Are you sure she’s hasn’t only been here three days, not months? Arriving at the same time your sister started freaking out?”

You can see the light start to dawn in her eyes, but you’re interrupted.

“Beryl? Do you have my second crystal?” It’s Astrid. She looks falsely concerned as she walks up and places a hand on Beryl’s shoulder. Behind her, a crowd of followers carry a machine between them. There’s a crystal at the centre, half a metre tall and thicker than your forearm. It’s glowing faintly. The bearers weaken with every step. Some of them collapse and are left behind.

Beryl seems oblivious to the weird alien writing all over the machine, and the vibrant energy that fills Astrid as the machine gets closer. How much control does Astrid have over Beryl’s mind?

“Tell me that’s not true. Tell me you had nothing to do with Dawn.” You can hear the doubt in Beryl’s voice.

“Of course not,” says Crane. “These people are full of negative energy. They want to stop you fully transcending.”

The crystal emits a deeper hum. It’s almost headache-inducing at this frequency. You can see how pale and tired her followers look, slumped where they sit. Lang is creeping closer to the machine, his hand resting on his raygun in its holster.

“Come, sit with us,” says Astrid. Beryl takes a step forward. Her gaze darts towards you.

Astrid lunges forward suddenly and seizes Lang’s arm in an inhuman grip, bending his fingers back until she can prise away the gun. The more energy she absorbs, the stronger she grows.  “Don’t move!”  With her other hand she pulls the second crystal from Beryl’s limp grasp, and slots it next to its larger counterpart. You feel your limbs weakening and you join Lang in a crumpled heap on the ground.

Astrid grunts in satisfaction and turns her full attention to the machine.

You have to act. You take advantage of her confidence, and slowly, painfully removing your own raygun from its hoster, you take careful aim, and fire. Some of the assembled followers murmur in their sleep. A few of them even open their eyes from their stupor.

Astrid screams in rage and it gives Beryl enough of a distraction to break free.  Despite her weakened state, she manages to lift the crystal from its base and throws it to the ground.

There is a loud crack as it splinters through the middle.

The absorbed energy is released from the crystal in a sudden burst of light that dazzles you. When you blink away the spots in your vision you find Astrid lying at the base of the machine, withered and emaciated, her hair a wisp of snowy white.

Soon agents are swarming on the scene, helping the stunned followers, and tending to Lang’s broken hand.

Beryl looks at you, pale and wide-eyed. “You’re…. you’re not from ASIO, are you?”