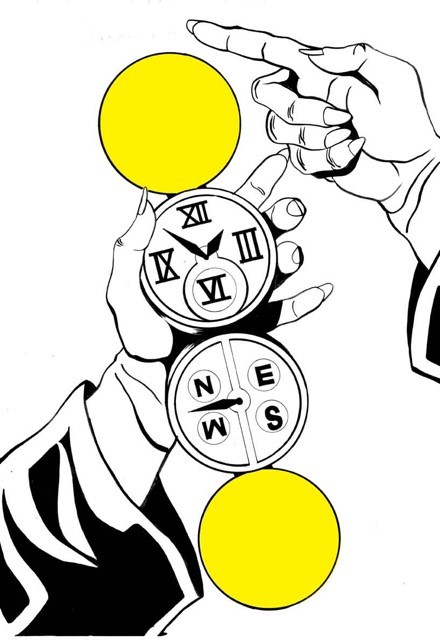 Passing Café Rockpool, you turn at the sound of running feet behind you. Abramelin, charred and with thin streams of smoke trailing off his clothing rushes towards you, patting out flames from his coat.

“That was close!” he says, falling into step beside you. “We should be alright now. I gave them the slip near Australia fair.”

“Something is going on,” you say. “I can feel a presence, but I can’t put my finger on it. I used a spell from the book to enhance my perception and now I sense this… thing. I think it’s coming from the water.”

“Really?” asks Abramelin, surprised. “We’ve only studied it, none of us have had the guts to actually perform any of Ackerman’s magic. It’s just too dangerous.”

Before you can speak, a nauseating dizziness washes over you and you lose your train of thought. You feel as though you are balanced atop a pole so tall it reaches half way to the moon. Vertigo makes your knees weak and you feel the presence of something incomprehensibly large, a mind so alien you cannot begin to understand it.

Seagulls swoop and spiral above you, their cries muted and distant. Abramelin grabs your shoulder and jolts you from your thoughts.

“Look at that. Do you see?” He points out at the water. Steam is rising from a patch in the middle of the Broadwater where the sea is beginning to churn.

He takes chalk from his pocket and sketches out an esoteric compass on the ground. The rough needle springs to life and glows bright gold.

“This should point out whoever is responsible for that,” he murmurs, stepping back from the design.

The needle makes a sluggish circuit then spins out of control, whizzing like a propeller until it pops back out of existence.

“Hmm. That’s strange,” says Abramelin. “Follow me, maybe we’ll have better luck this way.” He pulls a circular brass device from his pocket and smiles at you with sheepish pride. “This is a Psychic Barometer. One of my own innovations.  Or we could go and ask the Gold Coast Oracle, I suppose. She’s not too far. We’ll have to walk the sacred path, though, you can’t see her otherwise.”

The Rockpools: Trust to the Psychic Barometer? Abramelin’s gadgets have a spotty reputation, but he’s capable of occasional genius. Besides, with your enhanced senses, you’re sure to discover something. Follow the path left, past the Café Rockpool and away from the Pier until you find artificial pools and fountains of the Southport Rockpools. Follow the path around the front until you are level with the strange blue fish balancing a ball on its head, you should be able to get a better reading there.

Maddie and Mike: Gold Coast Oracle? If there was ever a time to consult a higher power, this is it. Someone has to know what’s going on. Follow Abramelin along ‘The Spine’ a path through the well-tended Broadwater lawns lined with weird metal posts that burble and light up as you pass through them. According to him, these are magical purifiers which strip you of negative energy, rendering you fit to consult with a sacred oracle.  You can’t see her unless you pass between them. Cross the bridge over the wetlands, pass the Amphitheatre and follow the path until you come to a gentle sloping hill with a statue on top.