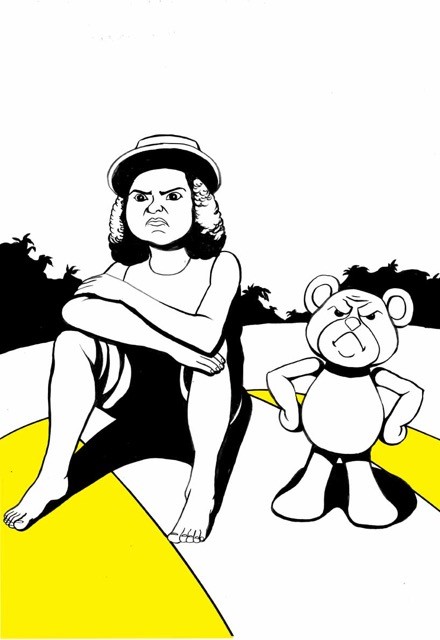 Your body still tingles from the odd magical field generated by the cleansing path. You feel purified and cold, as if you’ve just stepped out of a hot shower into a walk-in freezer. Abramelin keep glancing across the water to where the sea has begun to heave and churn, a slick black island rising in the middle of the Broadwater.

On a hill before you is a large statue of a young girl and a teddy bear, the girl staring dreamily across the water, her eyes shaded by a white sun hat.

“Oh, great Oracle of the Gold Coast! We humble petitioners throw ourselves upon your mercy. Grant us your wisdom and tell us what the hell’s going on with that black island in the water,” intones Abramelin, dropping to his knees and raising his arms in supplication.

The statue grinds to life, tilting her head down and glaring at you and Abramelin.

“This is ridiculous. Are you responsible for this form?” she asks in a surprisingly high-pitched voice.

“Well, my order is, I suppose,” says Abramelin.

“Of all the things to bind me to. The statue of a little girl.” Her fists clench. “I hate children, you know.”

The teddy bear beside her groans and stretches, flexing his arms and legs. “It’s true, she really does,” he says.

“Presently, I am Maddie and he’s Mike,” says Maddie, indicating her companion. “I’m the oracle, although I’ve been inhabited more dignified forms in past days.”

“Look, there’s something going wrong. The veil which separates us from the spirit world is fraying. Things are bleeding through. What’s going on?” asks Abramelin.

“Oh, right,” says Maddie. “There’s an Old One waking up about three thousand years too early, which is bad news all around.”

Mike cranes his head to look up at you. “Yeah, bad news,” he says.

Abramelin goes rigid. “An Old One?” he stammers. “Here? Now?”

“’Fraid so,” says Maddie. “Luckily, one of you happens to be carrying an object of ancient power. Maybe you could do something with that.” She inspects her fingernails and gives a little huffing sigh.

All of you turn at the sound of a gigantic splash in time to see the Old One’s crab-like head breach the surface. Not an island at all! Now ebon eyes on short stalks rise up, along with a mouth of grinding, whirring teeth, claws and tentacles reaching towards the sky.

“Better do as he says, mate,” says Mike, in a bored tone.

You flip through the pages, your palms damp with sweat. You don’t have enough time, you can’t concentrate. The Old One wades through the water towards the pier, leaving a glistening trail of corruption in its wake, turning the water to a bubbling oily stream behind it. Along the waterline, you see a pontoon shaped like a floating cowboy animate, sit up in the water and wave at you.

“Oh, I think I know who that is,” says Mike. “You better see what he wants, it’s probably important.”

Maddie snorts. “Him? Why would you put any faith in nature spirits? Take your book and sort out that Old One before it lays waste to everything you’ve ever known.”

The Pier: Do as Maddie suggests and rush to the Pier to confront the Old One with a spell from the book?  Head back the way you came, cutting across the grass and ignoring the Purification Warblers. Run straight to the pier and charge headlong into your ultimate destiny.

The Lagoon: Follow Mike’s advice and sprint to the Lagoon to see what this mysterious Cowboy can do. Nature spirit or no, you need any help you can get. Run along the path closest to the water, ducking past terrified people fleeing the madness from the water. Pass the little boats moored in the sand and stop when you reach the netted lagoon.