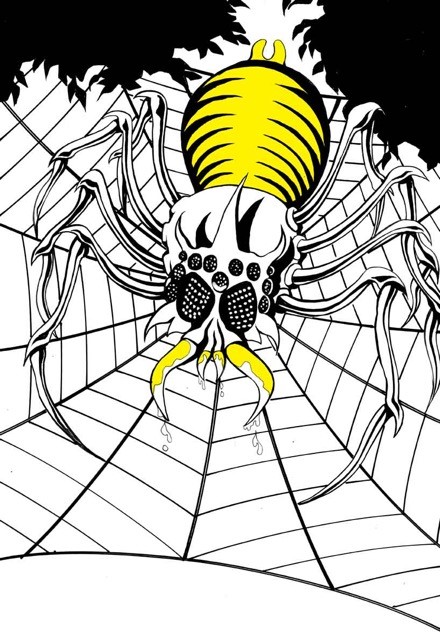 The playground has been infected by whatever magic is weakening the membrane which separates our world from the demimonde. The equipment has twisted over itself, taking on weird organic characteristics, seeming to breathe and pulse. From the direction of the Broadwater, the sea surges up and the shiny black crustacean head of an enormous creature breaks the surface, sending a wave rushing in towards the shore.

It opens its huge mouth and makes a sound you feel rather than hear, a mournful, hungry noise that speaks of countless aeons of starvation, frustration and pain. The thing is a walking blasphemy with claws the size of skyscrapers and a writhing mass of tentacles that fall like ropey hair from the rim of its armoured head. The water around it turns oil-slick black as it lumbers towards the shore.

You glance behind you to see Abramelin dragged down by the horde of gibbering homunculi and fear squeezes your stomach like a cold fist.

You feel the infectious fury of the thing bleed into your mind, drowning out Abramelin’s cries as he is taken down by the beasts. You plunge on, clawing at the air, trying to drown out the sounds. The fabric of reality seems to split and rend around you and in your haste you drop the Book of the Sun. Whatever is rising from the Broadwater is sundering the line between worlds, and things that belong in the demimonde are bursting into existence.

All around you are shrieks and cries, of which only some are human. Your foot catches on something spanning the path and you stumble, falling to the ground and scraping your hands. Spider web. What was once a large rope structure has transformed into sticky white strands, stretching across the path, linking up to trees. In the centre is a huge black arachnid, horned and slavering, tiptoeing toward you on delicate threads. Behind you, the creatures have finished with Abramelin and you can hear their triumphant chattering as they charge towards you. You scramble forward but are held fast by the entangling web. From the water, the giant beast takes it first, thundering steps onto land and the world itself howls in torment.

All in all, you think, this could have gone better.