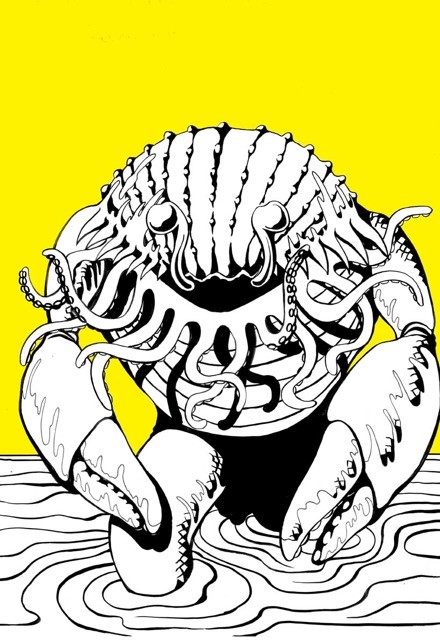 You rest your hands on the rail at the end of the pier. Out in the sea, water bubbles and seethes around a black, chitinous head easily twenty feet across. It rears back and roars its hunger, lifting two lobster-like clawed arms which clack shut with a sound like cracking stone. Waves tainted with oily sludge wash up against the pier, ripping away the satellite jetties and slopping over the side, making the ground slippery and treacherous. The enormous creature is half-way out of the water now. Its head resembles a giant mud crab, festooned with jagged ridges and twisting horns. Protruding eyes scan the land for prey.

Abramelin crashes up against the railing next to you, gasping for breath.

“That’s an Old One!” he shouts, as chaos erupts on the land behind you. “An ancient evil from time before time, a devourer of worlds! Do something!”

“Read the book! Get its attention!” He summons the last of his energy and starts hurling bolts of power at the Old One, only to have the crackling bursts dissipate before they even reach the titan beast.

You crack open the book, flipping desperately through the pages. Nothing leaps out at you as being immediately applicable to your current situation. You glance up from the pages to see that the Old One has responded to Abramelin’s assault and has changed course, lurching towards the pier.

The time you’ve spent with the book, combined with the phenomenal amount of magical radiation you’ve both been exposed to today, has heightened your senses and powers. You can stop this.

As the Old One closes in and Abramelin’s declining strength finally gives way, you close the book and then your eyes, feeling the rush of air against your face and inhaling the abyssal stench of the creature from before time. Your nerves feel alive, as if every cell in your body has become charged with electricity. You run your fingers along the rough edge of the pages until you feel sudden heat, as if one page in particular was red hot.

You open the book and look down at the page. It’s a spell to fold time in on space and then back again on time, making origami out of reality to create a tiny, localized black hole. There’s not enough distance to do this safely, whatever you accomplish will take you and Abramelin as well as the Old One with it. Take you where? No way to know.

As the black, shining carapace of the creature blots out the sun and it raises its demon claws to smash you, Abramelin and the pier to tiny pieces, you draw the symbols in the air, beyond chalk and signs now, you trace magic on the face of reality itself. Time slows, the descending mass of claws and tentacles is reduced to a crawl. Abramelin’s wild, desperate screams are frozen, hanging in the air.

At peace, you complete the spell, feeling the power rush through you like a torrent. Time becomes space becomes time, uncountable folds one upon the other. You, Abramelin, a few seagulls foolish enough to be in range and a very surprised octopus wink out of existence. This existence, at least.