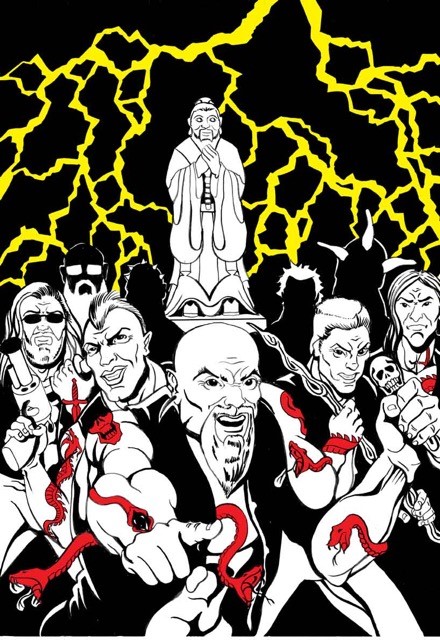 As you walk down Davenport Street in Chinatown the red lanterns flare to life and begin glowing. Somehow, Abramelin isn’t as disturbed by this as you are.

“Do they usually do that?” you ask.

“No,” says Abramelin. “There’s something in the air. All our wards are flaring, there’s a tremendous build-up in magical energy.” He fumbles in his coat pocket and produces a wooden cube set with black iron dials. He holds it up for you to examine and the dials spin and buzz, making arrhythmic ticks. A spring bursts out of the side with a hiss of steam and Abramelin stuffs the box back in his pocket. He glances around, nervous.

“You see? Can’t measure it with a thaumometer.”

He sits on one of the little metal stools along the side of the road, the patterns of dots shimmering and glowing as he does so. “We acquired the book in an estate sale. You know the score. Some collector snuffs it and no one has much use for books any more. Our initiates spend the first years of their education just trawling book auctions. We made every provision for secrecy, but by treachery or deception the Blind Jackals have discovered we hold Ackerman’s grimoire.”

“The Blind Jackals?” you ask.

“Vicious thugs. A motorcycle gang with deep connections to the occult. We should be safe here, though,” he says, indicating the red markings cut into the road. “Powerful protective spells are set in the road, and there is a power node nearby.”

There is a roaring crash from the end of the street by the statue of Confucius and thirteen motorbikes screech to a stop there, arranged in a V formation. They step off their bikes, slapping down kick stands and drawing an assortment of ensorcelled handguns, spiked wands and chrome staves.

“Give us the book, old man!” howls the leader, thick arms swathed in writhing tattoos.

He throws a bag of foul-smelling powder on the ground which flares in a sudden burst of light. The red markings laid in the asphalt spring up and become a wall. He ducks behind, building a fireball between his hands as the Blind Jackals hurl hexes and curses at him.

Cracks skitter through the barricade and he flings the fireball over the wall, incinerating a pair of bikers. Though the magic bursts and sprays across the street, scattering across the ground in glowing embers, he seems more concerned with your safety than his own.

“Get to cover!” he shrieks. “What are you still doing here? Protect the book!”

He throws up his hands, sending a shard of lightning ripping along the streetlights, setting the red lanterns alight and raining forks of electricity down over the Jackals who return fire with a volley of sizzling green flames which tears chunks from Abramelin’s barricade.

Chinatown, Young Street: Ignore Abramelin’s words and rush into battle alongside him? He called you to protect the book, but can you leave your friend to fight alone? Duck under the volley of magical blasts and follow Abramelin past the statue of Confucius left into Young Street, stopping when they corner you in the alley.

Southport Central: Protecting the book is the priority here. If a group of renegade magicians got hold of The Book of the Sun, there’s no telling the destruction they might cause. Flee right down Young Street, avoiding the sizzling blasts of magic that fly overhead. Turn left down Garden Street and run past the roundabout until you reach the back entrance of Southport Central. Rush through until you reach the courtyard.