Did you accidentally trigger the wrong location? If you were heading to BB2 with Abramelin, then keep following the map to that location to continue the story you’ve chosen. 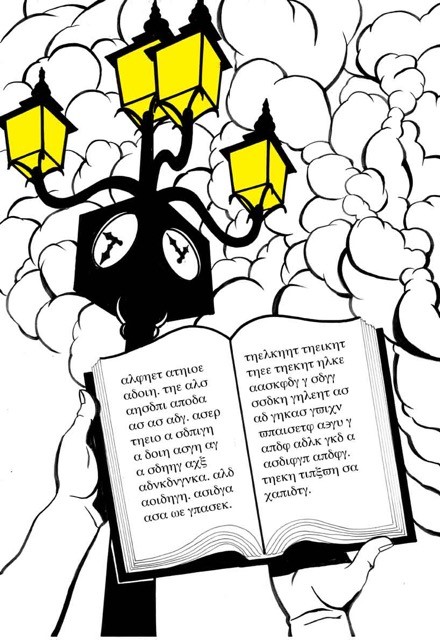 There’s a clock here, incongruous in the middle of the street, sprouting lamps like a crown. No one pays it any mind, despite its strangeness. It’s a Lucerna, a place of safety established by the Ordo Templi Australis, offering sanctuary to members of their order and, luckily for you, their allies. Checking over your shoulder for signs of pursuit, you settle down at the base and lay the grimoire across your knees.  The Book of the Sun is an object of true power, containing the wisdom of an exiled master. You’ve read books of magic, learning the hard-won secrets of those who had gone before, but you’ve never had access to something like this. The Goetia, gnostic scrolls, Cornelius Agrippa’s four books, none of them hold up next to the rumour-shadowed power of Ackerman’s magnum opus. You flip the book open and start reading. The pages are tight-packed with Ackermann’s cramped handwriting, clumped in bunches around strange glyphs and magical signs. You don’t have time for close study but near the middle of the book you see a relatively simple incantation to enhance your second sight, heightening your perception of the unseen world.

From the direction of Chinatown you hear shouts and cries, then the hissing buzz of a distant magical duel. Poor Abramelin may have met his match. You need to find something to help him, fast.

You chant the words, feeling the power course and flow through you, running like a golden thread tracing your veins, setting your nerves to spark and tingle. You raise your hands above your head, holding the book high. The magic crackles from your hands and the spell of a long dead mage comes to life on your lips, completing itself as your spine arches and you throw your head back in the ecstasy of power.

You sit back down, head spinning. Signs in languages unknown to you swim and blur, then resolve themselves in your eyes. The chatter of students at the TAFE drones for a moment like a swarm of flies and then becomes comprehensible. The murmuring of spirits bound in paint along the street chuckle and whisper to you. Pulsing auroras of energy warp and flow through the sky, lighting the street with colours beyond the usual spectrum. The ghostly, half-seen images of thoughts hover over the heads of passers-by, flickering like film through an old projector.

There is something else. You become aware of something deeper, slower than human or spirit. A pulsing fanfare of alien thought, strange and hungry. You can’t make out individual words, but there are whispers, or echoes of whispers drifting through your skull. This heavy presence is pulling at you, promising… Well you’re not sure, but promising something.

Chinatown, Young Street: Use your new sense to help Abramelin? You’re not sure how enhanced psychic perception will help in a fight, but perhaps it will give you the edge you need. Throw caution to the wind and charge back across Scarborough Street and turn left into Davenport, dash through Chinatown and turn left again at Confucius to aid your friend.

Cafe Rockpool: Follow the strange subliminal voice? Time is running out for Abramelin, and you need to act fast to protect this book. Abramelin himself told you that the book mustn’t fall into the wrong hands. Instinct tells you that the appearance of this powerful presence is no coincidence. Continue along Nerang Street towards the Broadwater, passing the Koala statue and crossing the road.