Did you accidentally trigger the wrong location? Never fear, if you’re wanting to spirit the Book of the Sun to safety, continue to follow the map to BB5 to continue your chosen adventure. 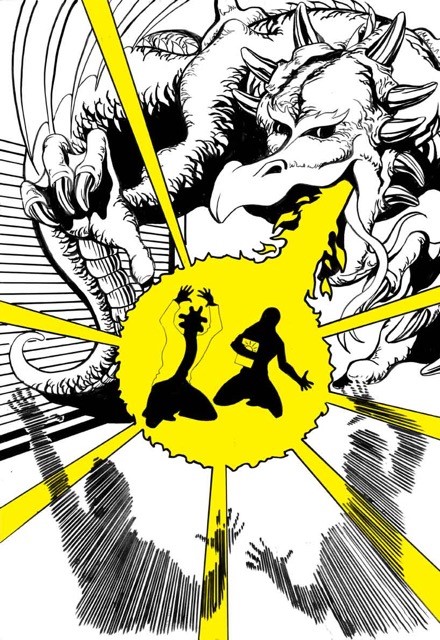 Abramelin is backed into an alley, surrounded by a faint, shimmering shield of energy. You run to his side, throwing your most powerful offensive hexes at the massed ranks of your enemy. All Abramelin’s defences fail before the thundering volleys of the Blind Jackals, the shield winking out as he ducks a purple bolt of energy. He claps his hands together and pushes an orb of combusting air towards the bikers, smelling of ozone and petrichor. You dodge a conjured ice shard and return fire, the power shooting from your hands and catching a Jackal high on the chest, blasting him into the statue of Confucius.

“I told you to go!” shrieks Abramelin, desperation in his eyes. “There is far more riding on this than just one life!”

But you’re determined. You can do this. You think.

Your heart thuds in your chest, hands clenched at your sides.  You open the book, scanning the pages for something that might help, but rune-carved bullets, spears of lightning and gouts of flame drive you back, tripping and slumping against the wall. The Jackals surround you and Abramelin, corralling you both in the alley. The shutter behind you rolls down, revealing a painting of a dragon. Abramelin catches your eye for a moment. “I’m sorry. There is no other way. I told you to run.”

As the Jackals move in, vicious expressions leering from wild, unruly beards and wraparound shades, Abramelin begins to chant, drawing a phenomenal amount of energy out of the air and into his body. The concentration of power is suffocating, prickling your skin like a heavy jacket on a hot day.  The dragon behind you begins to glow, then emerges from the shutter, growing incandescent.

Too late you realize what he’s done. One of Ackerman’s power nodes is here in the alley, marked out with a painting. Abramelin has transferred his energy into the node, pouring everything he has into the site. That much power can’t be contained in one place for long. He has made a bomb powered by magic. Perhaps some of the Blind Jackals are able to flee, those in the rear ranks of the warband. But you and Abramelin and the mages closest to you are enveloped by the dragon’s fury, a blast of light and heat so intense that not even your shadows remain, just the fading echo of your lives bouncing along the corridors of eternity. The Book of the Sun is lost forever, as are you.