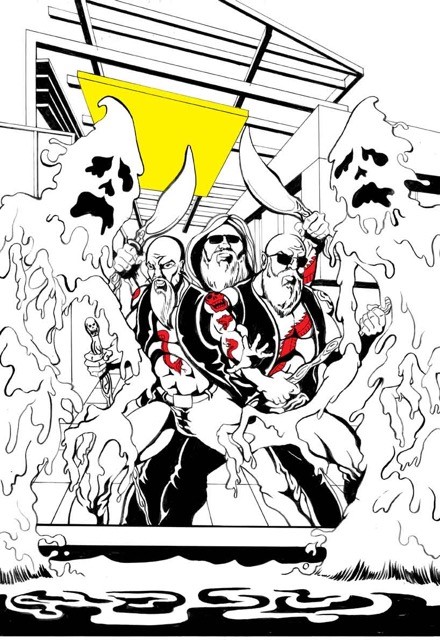 You dart off the street into Southport Central, a confused cluster of architectural excess. You feel the book’s aura tugging at the corners of your perception. Weird shapes shimmer and reflect from the blue glass windows. A terrible flash spirals up into the sky behind you, forming a brightly coloured mushroom cloud. You hear the distant roar of motorcycle engines and angry shouts from the survivors of Abramelin’s last stand. The rippling aftershock of the blast rushes over you, slamming into the buildings of Southport Central.

The towers seem to curl over you, forming an arbour of concrete and steel.  Wind howls through the new tunnel, whipping at your clothes. You whirl at the sound of running feet and see three of the Blind Jackals push past civilians in pursuit of you.

“Give us the damn book!” the leader roars, brandishing a chrome staff, tipped with a black skull. He swings the staff in an arc and figures burst from the pools of water around you, swirling beings composed of liquid with ferocious, dripping faces and spindly, reaching arms. “You don’t know what you hold in your Philistine hands. Give it to us. We know what to do with it.”

You hurl fire at the water creatures in a crescent. One ducks back into the pool but the other bursts into a cloud of shrieking steam.

“Hand it over and we’ll let you live!” Bartleby the Red stalks towards you, flanked by his henchmen.

You flip the book open and scan the pages desperately while the Jackals advance on you, taunting you with strange, hooting calls. You find a spell to breathe underwater, a cantrip to locate hidden gold, a spell to pass through paint into the demimonde and an incantation that allows the magician to build a tower in a single night, but nothing that seems immediately effective. Then your eyes flick back over the building spell. To perform it, you first draw an image of bricks and then use magic to manifest and manipulate them. On the building above the three remaining Jackals is a feature wall resembling a collection of Lego blocks. There’s no time to test your hypothesis, you read out the spell and wave your left arm, tracing mystic patterns as directed by the book.

The Lego-blocks emerge from the wall at your beckoning, growing solid and heavy in the air, floating above the heads of the Blind Jackals. You halt your incantation and the blocks crash to the earth, crushing two of the warlocks and the remaining water creature. Bartleby throws himself clear and then struggles to his feet as a cloud of dust expands to fill the air.

The membrane between the mundane world and the magical demimonde is weakening. Your second sight is twisted and confused with your normal vision. Bartleby the Red is both man and monster, a tall, muscular human, and a goat-legged horned beast who occupies the same space but not the same reality. He takes a staggering step forward, throws his head back and roars. His human flesh bleeds into leathery hide, swirled like thick oil paint.

Forest Alcove: Do you take refuge at a Lucerna on Short Street? You need to regroup and find a spell in this book that’s half useful. Head out of the east entrance to Southport Central, get across Scarborough Street, turn right and head past the church then turn left into Short Street. Pay attention, behind a cinderblock wall on your left is a hidden grove.

The Painted Alley:   Use the spell that allows you to pass through paint into the demimonde? You know there’s a big mural on Scarborough Street where you could hide and catch your breath. Head through the east entrance onto Scarborough Street, turn left and hurry like a goat-legged magic beastman was chasing you. Which, he is. Go past Young Street and keep your eyes left. There is a huge mural painted on the wall half-way between Young and Nerang.