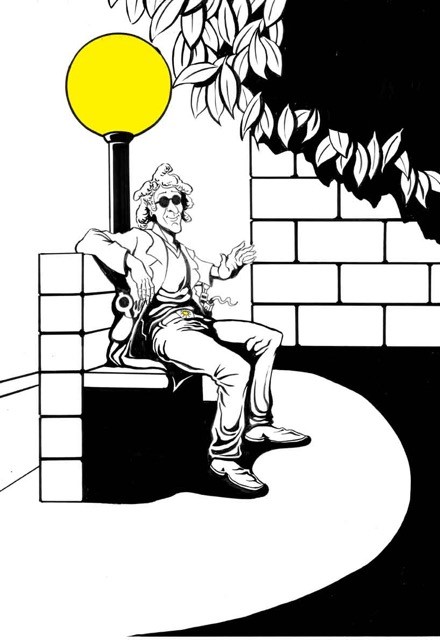 You brush past the overhanging branches and slip into the Lucerna, the globe lantern flaring to life as you activate the sanctuary with your phone. Bartleby dashes past then stops, sniffs the air and howls in frustration. He turns and takes off back toward Southport Central trying to catch your scent. You slump down in relief on one of the benches and nearly fall off in shock when Abramelin waves at you from the other.

“What? Yes,” you say, holding it up. “How did you get away?” Your head is spinning, out of breath from your exertions.

“Oh, I activated a power node and infused it with a thaumic surge, converting it into a high magic output which attracted the attention of a planar dragon, resulting in a catastrophic manifestation and I hid in a bin.”

“Yes, they’re remarkably resilient. I suppose they’d have to be.”

“Look, there’s something big going on,” you say, leaning forward on the bench. “I mean apart from the book. Things are coming alive, people are transforming into goat monsters. What’s happening?”

Abramelin sucks air in through his teeth, making a hissing noise. “About that. Ackerman’s prophesies are vague and subject to interpretation at the best of times, but one thing he keeps coming back to is the World-tide, the theory that worlds drift apart and flow back together, overlapping and passing through each other over the aeons.”

He takes the book and turns to a page showing overlapping circles, like phases of the moon. “You see here? That’s us, now, our world almost completely overlapped by the other. You might have noticed your powers have become stronger. Where we draw our strength from, the demimonde, is so close now we can almost touch it. That’s why the power nodes are all activating, the distance between worlds has vanished.”

“But if we can touch it,” you say, a sinking feeling in your heart. “The things that live there could reach through and touch us.”

Abramelin opens his mouth to reply but is silenced by an inhuman roar from the direction of the Broadwater. He stares at you agog for a moment then bursts out of the Lucerna. You jump to your feet and follow him, staring down the tree-lined street.

“What the hell was that?” you ask.

The Dragon Box: Yell, “To hell with whatever is happening in the water!” You’ve got to finish things with Bartleby the Red. You know there’s a power node at the other end of Chinatown, you could activate that to give yourself an edge. If you dash down Scarborough Street, Bartleby is sure to pick up your scent and give chase. Turn left up Nerang Street, past the tram station and find the power node, brightly painted like a dragon.

The Pier: Decide Bartleby the Red has lost your scent, and go with Abramelin to investigate the water? Whatever is generating this much power must be at the centre of everything that’s going on, you might be able to stop Bartleby by proxy that way. Head east down Short Street then turn left along Marine Parade. Continue until you reach the crossing at the end of Nerang Street. Cross the road and head past Café Rockpool, straight ahead to the end of the pier.