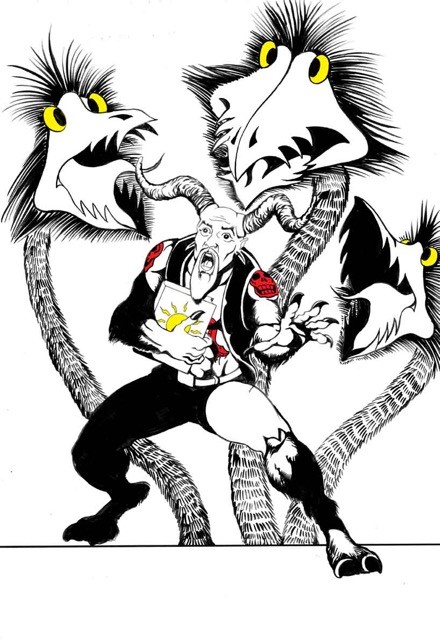 With Bartleby in hot pursuit you slam up against the emu mural. You whisper the spell and turn to face Bartleby, feeling the odd, rippling texture of the wall beneath your fingers. Bartleby skids to a halt in the alley. He roars in your face, his taloned fingers clutching convulsively at the air. Behind you, through the wall, you hear odd pecks and scratches and a strange, deep-voiced squawking. You hazard a glance behind you and see the three emus in their true forms, blazing red eyes staring out into the world, beaks lined with razor teeth, salivating with wicked hunger.

“Nowhere left to run now,” Bartleby growls. “This could have gone easy.” He looks down at himself, inspecting his furred arms and long black claws. “And this. This is unexpected. What did you do to me?”

“Me? I didn’t do anything!” you say. “Whatever’s wrong with you hasn’t got shit to do with me.”

Bartleby snarls and swipes at you but you dodge the clumsy blow. “Give me the book. Give it to me and I’ll let you keep one of your arms, one of your legs.” He makes another grab for you and you duck around him, facing the wall.

“Why do you want the book so damn much?” you ask.

“You don’t know?” He gives a braying laugh, flecks of saliva matting his beard. ”That book is a road map to power. A key to every secret in the country. With control of every powerful site in the state, the nation even, there is nothing a man could not do. You are holding the key to the world.”

He lunges forward and you throw the book at him, catching him in the face. He stops, puzzled and leans down to pick the book up.

“Why…” he asks, but you leap forward, throwing your full weight against him and slamming him into the wall. He gives a startled yell but half his body is sunk into the soft membrane of the portal to the demimonde.

“What’s happening?” he screams, struggling against the psychic mire.

You watch as the emus gather around Bartleby’s emerging body, taking light, testing pecks at his back. He screams and thrashes, struggling to free himself from the wall but only pushes himself deeper. The book, held tight to his chest, begins to glow white then bursts into flames. Bartleby shrieks, long terrified wails as the spirit creatures drag him through to their desert hell on the other side of reality.

As you look on, they tear him apart. The book burns up into nothing, becoming dust and ash, settling on the red painted desert floor of the emu’s small universe.

“No one on earth should hold the key to the world,” you say.

Abramelin chose well. So did you.