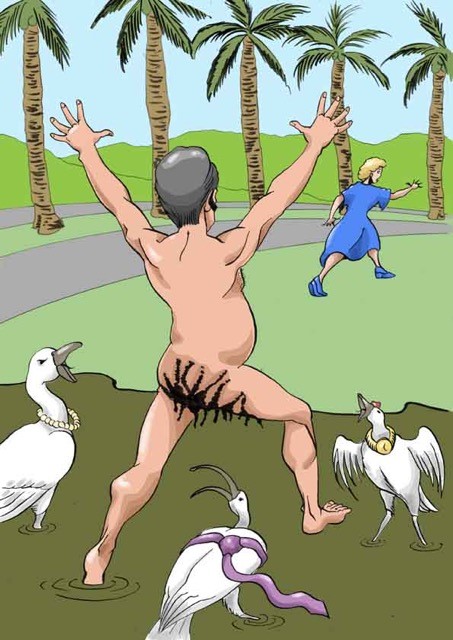 You scuttle as fast as you can around the roundabout, down The Parkway, trying hard not to draw attention to your wings. A group of kangaroos sunbaking on the fairway greens to your right bounds away in fright. You wish you could follow them, where’s a tail when you need one?

You come to another roundabout and waddle left across the grassy verge, thinking you’ve left the madness behind. Up ahead you see a large kidney-shaped lake full of duck-poo brown coloured water and …geese, dozens of them. You feel an instant affinity with them and the fetid funk of rotting vegetation and mud. A chorus of ebullient honking rises to greet you. Could they be cheering you on? You glance over your shoulder and quake with panic at the small procession pursuing you: Mefil and several buggies bulging with resort security, and there, trailing behind, your godmother screeching like a peacock possessed.

You give your wings an experimental waggle. Still nothing. Great, the first time in your life, you have decent body parts and you can’t do a thing with them. No matter, you’re almost at the lake. There’s no way mad Mefil will follow you in there and risk ruining his velvet.

You’re wrong. Seconds after you swan dive over the fence into the soupy water, you hear a crack and feel the stuffing knocked out of you. You float amongst the waterfowl trying to work out what part of you he zapped this time, but you’re still skin and bone, even your arms are back and incredulously, one by one, the geese bobbing around you are transmogrifying… into humans. So, you weren’t the first to fall fowl to Mefil’s machinations!

A muted burble bubbles beside you. You glance over and see Barry lumbering from the water butt naked except for a few strands of rotting algae. He barges like a crazed swamp monster after Delilah who is making a hasty retreat out of the resort, down The Parkway. No amount of Ctrl Alt Delete will ever be able to erase that image of naked-Elvis from your memory.

“Release me you scoundrels!” spits Mefil in a very un-magical way. “You have no proof that Sphererux is mine.” He guffaws at the grapefruit coloured orb smoking in one of the security men’s hands.

“You mean, apart from the initials MM inscribed on it?”

“Ah, curse that damn apprentice,” roars Mefil. “Curse you all!”

“Not so magnificent now, eh Mefil?” A man in a pinstripe suit and straw boater you recognise as the Resort General Manager pulls up in his club car, beaming at you and your flock of un-enchanted resort guests. You hope he’s brought some bathrobes with him; some of these people looked far more fetching with feathers.

“This Sphererux seems to be one that reverses evil avian spells instead of thwarting hapless ring-bearers,” he says.

You stare at him stunned. For a hotel manager, his knowledge of magical devices is outstanding.

“If you hadn’t alerted our security lads with all that hullabaloo, we might never have been able to account for these missing resort guests. Bravo! And, to reward you for outwitting Mefil’s skulduggery – free holidays at the resort for the rest of your life,” he says, with a grin as wide as his outstretched arms.

Result! You open your mouth to thank him and… honk with delight.