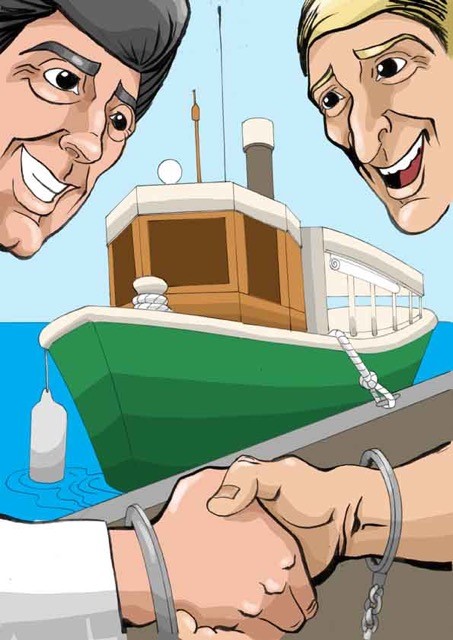 Disappointingly, there’s not a single pirate ship in sight however, you spot Barry slouching in front of the Pier E sign.

He opens his arms wide in welcome as Phil hurries over to him. They spend the next minute in a passionate embrace. Revelation slugs you in the guts with both fists: Barry harbours a predilection for people like himself – impersonators. You believe in live and let love but are outraged that Barry is two-timing Delilah with someone like Phil – he’s no Jack Sparrow, after all! Certain now that they are trying to scuttle Delilah’s wedding, you charge up to them.

Barry spots you and turns to flee, yanking Phil with him down the ramp into the maze of jetties. You hesitate for a moment. You know you’ll never catch them on foot; you need something faster so you belt over to Pier H a few piers away and sprint down the jetty to the weather-beaten Harbour Master’s Office at the end.

When, the Harbour master finally answers your crazed hammering, you regurgitate your pirate tale, expecting her to throw a life buoy around you and have you committed. Instead, she grabs a key-float off the wall and drags you to the closest runabout moored alongside. Pulling you aboard, she starts up the engine and flicks on the VHF radio.

“Here, you steer! I’ll call for backup!” She’s clearly mistaken you for a competent crewmember but you do as you’re told. How different can manoeuvring a speedboat be from handling a dodgem car?

Turns out, quite a bit. You narrowly miss T-boning several luxury motor yachts as you come to grips with nautical navigation but eventually catch up with Barry and Phil who have seconded the MV Kilkie, normally moored at Pier E, as their get-away vessel. It’s an epic poor-judgment-call on their part; the Kilkie looks ancient, more like a tug than an escape vessel. You apprehend them with speed but zero grace.

Together with the water police, you escort the Kilkie back to the marina. Attracted by the harbour-side drama, a small crowd jostles on the narrow jetty for front row views, amongst them you spot Delilah in her flouncy blue beach kaftan.  The exhilarating chase has tempered your anger but you still have to know. As the police drag Phil and Barry dockside, you ask, “Why? Why cheat on her with this pirate scum?!”

Phil recoils in horror. “Cheat? I’m not a cheater or a pirate. I’m just the wedding singer.”

You stare at Phil and Barry along with a bemused crowd of on-lookers and what turns out to be two local TV news crews. Delilah edges up beside you, gazing questioningly at her betrothed.

“You left ‘thief’ off your job description,” you say, still fuming.

“I couldn’t go through with it this time,” Phil says, staring solemnly at the cameras.  “I can’t continue to steal symbols of love for that ludicrous crook, Luigi – I’d rather sing about love, not steal it. So when Bazza here offered me a musical partnership, well how could I say no?” The two men gaze adoringly into each other’s eyes as though they were the ones about to swap vows.

You roll your eyes. “Why bolt when you saw me then?” you ask, confounded.

“It’s pretty obvious I’m not the favourite song on your playlist. I panicked, thinking you’d want to throw a spanner in our plans. Phil needs this break real bad, see?”

Maybe Barry isn’t as big a boofhead as he looks, you muse.

“But what about my rings?” Delilah murmurs.

Phil shoots Barry a look of desperation.  A wave of compassion sweeps over you. This is your chance to build a bridge over troubled water.

“I think I know where to find them,” you announce.

Later, after Fergus and his bionic doggy partner are located with ‘their’ bouquet and Delilah says, ‘I do’ to Barry (against a backdrop of Phil’s sea-of-love-ballards), your story and face are broadcasted into every lounge room on the Coast causing a talent scout to descend on you faster than a seagull on a hot chip. Ironically, she thinks you have bucket-loads of hero potential and offers you a B-grade role in a major motion pirate picture being filmed on the Gold Coast. You accept.

Move over Elvis, here you come!