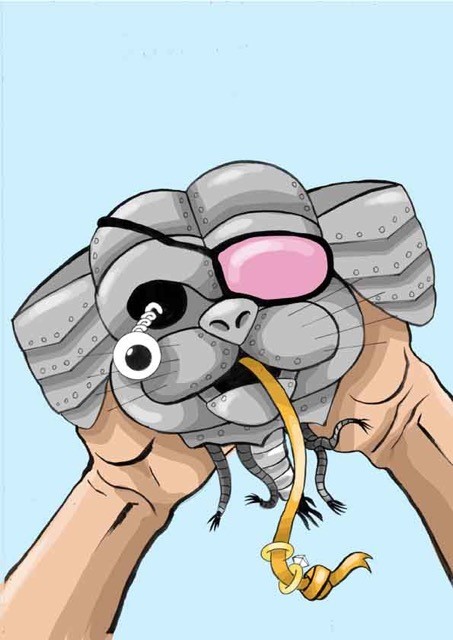 Stella falters at the head of the Pier B ramp, turning on Fergus who refuses to relinquish the bouquet. You’re convinced that if you can retrieve the bouquet, you’ll get the rings and then, not only Delilah’s undying gratitude but also the right to remain in her family and be part of her hefty inheritance. That’s not too much to ask for, is it?

You creep up to them, hand outstretched, calling Fergus’s name. He looks from you to Stella, undecided. You wish you had some guano-scented snacks to tempt him.  You edge closer. Stella’s eye flashes red and she emits a high-pitched bleep before nearly snapping off your fingers. Fur hangs from her rear-end in fleecy strips revealing more of her metal hide.

Unbelievably, Fergus drops the bouquet to defend you. Stella seizes the moment and thrusts her tiny bionic head amongst the ragged blooms, extracting something long and orange with her teeth. Not to be outdone, Fergus snatches up the bouquet again and takes off back into the Marine Village enticing her to follow. Apparently, True love is blind.

Stella has other ideas. She turns all two inches of metal tail, and darts down the jetty. You glance back and see Fergus galloping into The Docks Precinct with the bouquet dangling from his lips. You want to follow the bouquet but are curious about the ribbon that Stella is intent on taking. What if it holds the rings? You need to get them back. You leg it after the cyborg-mutt down the jetty. She’s manically fast. You tear down Pier B then bolt along the C Arm walkway to Pier D.  You’re only half-amazed to see smoke rising from her backside as she skids around the corner to the left, slowing parallel to George’s Seafood restaurant.

A high-pitched eep echoes down the pier. You’re gaining on her! You knew all that mini-bar chocolate would come in handy. You can see the rings swinging wildly from her mouth as she trots below the massive curved glass facade of the restaurant overlooking the marina. You risk looking up. Dozens of engrossed diners stare down at you from their air-conditioned Greek adorned aquarium.

Naturally, she speeds up; you have as much control over her as you do Fergus.

Suddenly a lifejacket sails from the motor yacht moored alongside the jetty, landing with a wallop in front of Stella. That’s bizarre, you think, it’s not like she’s drowning. Stella slams snout first into the jacket, crunching to a stop. You see your chance and dive, rugby-style onto the flailing canine with more force than strictly necessary to bring down a small mechanical beast.

Stella’s legs buckle and her thin metal veneer crumples under your assault as a barrage of tiny screws and pins disgorge from her gut.  Exulted with her termination, you rise to your feet to the sound of hammering footfall as Barry and Phil rush upon the scene.

“Give me those,” Barry roars, lunging towards you.

You realise you’re holding Stella’s head, or what’s left of it, in your hands. Wires zap and fizz from the gaping hole in her neck where her body should be. Her eye stares blankly at you. The ribbon with Delilah’s rings on it droops lifelessly from her mouth. You register the horrified expressions of the diners above you and Barry’s stricken face before lobbing the head as far as you can into the marina.

Turning your back on Phil’s anguished howling, you head for the Village Green. You deserve a chocolate top-up.