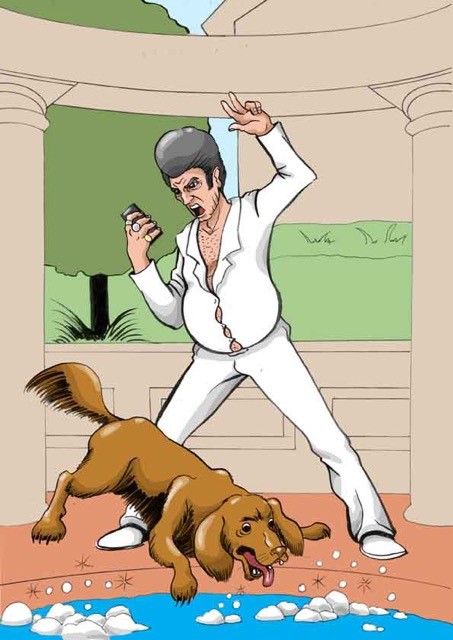 A day by the pool would be much better use of your time than searching for a future no one seems keen on. You sigh and pace around the open-air spa encircled by sandstone pillars, half-expecting to stumble across toga-clad Romans. You feel so close, yet so far from paradise in this place and wish it were just you and Delilah on holiday, like the old times; no hyped up canines or inane relatives allowed. The only impersonators permitted, tourists masquerading as sun lounging lobsters.

Since when did everyone else’s happy-ending rely on you, anyway? The extent of this resort is daunting and you doubt your sleuthing skills are Hardy Boys standard but feel you ought to at least look as if you’re looking for the rings. Perhaps a walk is the answer. That’d give your ‘little grey cells’ time to formulate a better plan.

A slash of light momentarily blinds you. You survey the resort grounds. The flashing is emanating from the eastern side of the rotunda. It’s Elvis or rather Barry and his fist-full of fake rhinestone rings reflecting the sunlight every which way, as he gestures like an angry Nonno. He’s barking at someone on his mobile. You duck behind a fiercely manicured hedge before he has a chance to notice you.

You steal closer. Fergus is gallivanting around at the water’s edge, eyeing the bubbles. Good, you don’t want him blowing your cover while you eavesdrop. Concealed behind a pillar, you manage to catch a trickle of Barry’s tirade above the bubbling boil of spa water.

Sorting what? you wonder. Has he found the rings?

He sounds even dodgier than he looks, if that’s at all possible. Maybe it’s time you get your detective on. As Barry strides out of the rotunda and heads towards the Marine Village, you slip from behind your pillar deciding it’s now or never.

But then you notice the unhappiest looking bride-to-be you’ve ever seen hastening towards you. Delilah is sobbing like somebody who’s checked into the Heartbreak Hotel instead of The Intercontinental. You could kick yourself. How could you be so insensitive? You hurry forward to meet her. She spots you and suddenly dodges left, hurrying into the maze of paths between the grey coloured block of accommodation and the main resort. Why is she avoiding you?

You look back and forth between Barry and Delilah’s rapidly receding backs, conflicted.

Antiques Shop: Convince yourself Barry is up to no good so slink between the gumtrees, across the lawn, and past the outdoor chess set after him. He cuts right through the eastern gardens by the cream coloured block of resort rooms disappearing into the labyrinth of paths. Eventually, you emerge at a strange looking urn. You follow the stairs leading down to Quay Street arriving just in time to see him rushing off to the right then swerve right again onto Masthead Way. You find yourself staring at the Sanctuary Antiques shop.

Checkerboard Squares:  Follow Delilah? You trek after her past the Woolshed to the large bricked area where resort staff are rolling out gigantic round tables for this afternoon’s outdoor reception. Weaving amongst them, you emerge at the steps leading down to the resort car park in time to see Delilah head left into the Marine Village. She hustles across Masthead Way into The Docks Precinct, a flurry of blue beach-kaftan.