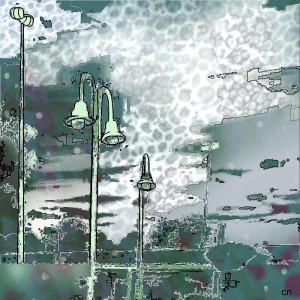 The moment you step off the train at Sandgate station, you can smell the salt in the air. This station is the portal between city and sea, and has welcomed visitors to the coastal village for over one hundred years. You’d love to head straight for the foreshore and dive into a pile of fish and chips, but that’s not why you’ve come today.

Sandgate is being plagued by a haunting. And it’s not something as simple as a spectre in the Town Hall, or a poltergeist at Sacred Heart School. This is bigger.

As locals wrote in their desperate letters, a ghost ship, the Bramble Spirit, has been sighted sailing the waters of Bramble Bay. Normally, you wouldn’t get caught up in ghostly affairs offshore. The ocean is full of mysteries, and they’re too dark and deep for even a seasoned ghost hunter like you to solve. But this ghost ship is connected to Sandgate, and its curse has reached the sand, creeping into the avenues and shops and houses of the village.

The curse has manifested in many ways. People have become mysteriously ill, or tormented by bad luck. Some have gone missing. Eerie apparitions have popped up in unlikely places. Music with no source has floated through the streets, unnerving yet hypnotising. The weather has been dark and miserable, and it’s becoming hard to remember the times when Sandgate was a seaside getaway that visitors would flock to.

As a ghost hunter, it’s up to you to solve the mystery of the Bramble Spirit and send it back to the afterlife, where it belongs.

The train leaves the station with a rumble. But long after it’s disappeared from the platform, the sound remains. You realise it’s not coming from the train. It’s coming from the ground itself… almost like an earthquake, although you don’t get those in these parts. You’ve felt this sensation before, of a room moving on its own, chandeliers swaying from the ceiling, cups falling off counters to shatter on the ground. It’s the sensation of a troubled spirit. But instead of a single room, the entire town seems to be shaking from its core.

There’s no time to waste. Where do you head first?

The Library: Do you start where you always do at the beginning of an investigation—at the Sandgate Library, where you can consult your trusty books on the history of this Bramble Spirit?