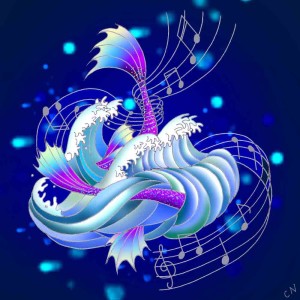 This is the first time you’ve trusted Magdalena Moon to help you with an investigation, and you hope you’ve made the right choice. As you stand by the leaning tree, looking out at the ocean, it’s undeniable that the normally picturesque scene seems wrong. There’s a thick mist that’s formed on the horizon, and through it, you can see the intimidating figure of the Bramble Spirit appearing and disappearing, like a light flicking on and off. The ocean is writhing with movement, and you see the slippery swish of a tail, too large for a fish, rise up and duck back down again.

What would you know? After all her mad ramblings about faeries and tree sprites, it looks like Magdalena’s right about the mermaids.

Magdalena pulls out a collection of silver instruments from her beaded bag. She takes the complicated looking bells and whistles, and hands you the triangle.

‘Can you manage that?’ she asks you.

You snatch it from her. Of course you can manage the triangle.

Magdalena has an unfamiliar string instrument under her chin, and a collection of bells attached to her wrists and ankles. She starts playing, blending the sounds beautifully together. Then she begins to sing, and you’re astounded. The sound of Magdalena’s voice has often annoyed you, but she has the singing voice of an angel. As she’s instructed, you tap the silver triangle in time with her song. You hum your own background melody, as the power of the music overcomes you.

Faintly, you can hear the mermaids singing from the sea, trying to fight your song with theirs. But Magdalena’s good. Magdalena knows exactly what she’s doing. Together, you continue to play the music, feeling it growing louder and fiercer and more beautiful with every note. You see the waves in the ocean churning as the mermaids become more frustrated, their tails flicking to and fro. In the distance, the silhouette of the Bramble Spirit hovers, not knowing whether to go forward or back.

You play and you play until your fingers ache and your mouth is numb and all you can hear is the music and all you can see is the sea. And finally, the ocean grows still again. The mist on the horizon clears. A beam of sunshine breaks through the cloud. You slow the melody, coming back to earth once more. There is no longer any sign of the mermaids or the Bramble Spirit. You’ve driven them away.

You hadn’t realised a crowd had gathered around you, until they begin to applause. As much as it pains you to do so, you take a step back and bow to Magdalena, directing all the applause onto the woman who had once been your rival. You’ll be paying more attention to what she says in future. After all, she’s the one who’s saved the day, really.

Although, you did do a great job of playing that triangle.