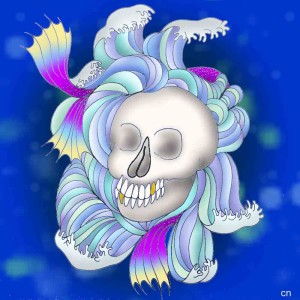 The melody leads you down Cliff Street, growing louder and faster as you approach the sea. But instead of feeling haunted by the song, you feel a thrill. Something about the sounds makes you feel calm and at ease.

You come to a stop at the sculpture outside the church, which depicts the delicate curls of a steel wave. You stand by the sculpture with your hand on the metal. The wave feels cool and wet, almost like the real thing. Out in the ocean, the water is calm and inviting. You can see a vast figure in the distance that’s making its way slowly to shore, and as it gets closer, you see that it’s the Bramble Spirit. But the ghostly figures on board the ship don’t look like wretched souls. In fact, they’re smiling and calling out to something in the waves around them.

Magnificent iridescent tails duck in and out of the water. The tails are vibrant hues of pink and blue and yellow, and they’re attached to the beautiful golden torsos of mermaids and mermen that are darting in and out of the waves, singing their song, beckoning the ghost sailors and you and anyone who wants to listen to come join them in their glorious realm under the water.

This is why people have gone missing, you realise. This is why Sandgate seems so bleak. It’s because there’s a wonderful world under the ocean that you’ve all been missing out on.

The metal wave begins to stretch and grow wider and larger and more real, until it is real, and it’s towering over you, threatening to crash. But why would you run away? Just like the song is telling you, in hypnotic tones and mesmerising melodies, you step into the wave and let it engulf you. You’re ready to join the mermaids and the ghosts of the Bramble Spirit in the watery depths of eternity. You hope it’s as nice down there as the song promises.